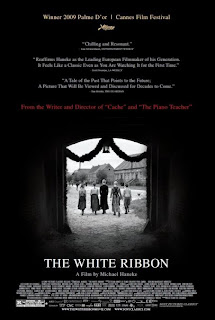 Looking back on the work of Michael Haneke, which includes films like Funny Games, The Piano Teacher, and Cache, his latest film, the Palme D'Or winning The White Ribbon, appears to be his most accessible film yet. But "accessible" for Haneke is a relative term. While The White Ribbon may not be as blatantly nihilistic and sadistic as Funny Games, it still features what has become Haneke's trademark austerity.

Shot in the starkly beautiful black and white of a world that is slowly losing its soul, The White Ribbon takes place in a small German village just after World War I. It is a quiet little village, deeply religious, and occupied with its simple farming lifestyle. But a mysterious string of seemingly random violent acts is beginning to put them in a state of unease. A man is ripped from his bicycle by a wire strung across the road. A barn is lit on fire. A mentally handicapped child is maliciously attacked and sexually assaulted. The air of creeping dread that begins to overtake the town permeates every frame of the film, and soon the town is consumed by fear and paranoia caused by their unseen assailant. 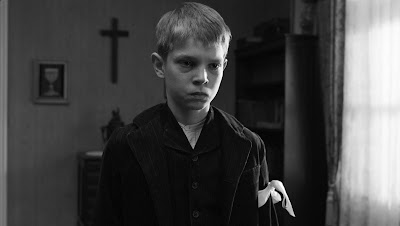 Haneke mostly observes the town and their routines between events. We see the local preacher tying his young son's hands to his bed to prevent him from masturbating, and "giving into sin." We see the tentative beginnings of young love, once again thwarted by circumstance and strict tradition. Everything in this secluded little town is buried beneath the surface, hidden behind a veil of piety and custom. By the time the true culprit is revealed, the effect is deeply unsettling. True to form, Haneke never spells out a specific perpetrator, leaving it open to interpretation. The White Ribbon is a film of ambiguity and nuance, but its conclusion, while open ended, leaves us with a strong and unshakable understanding of a world about to face profound changes.

The film takes its title from the white ribbon that the preacher's wife ties around the arms of her children as a punishment to remind them of their wrong doings. As such, the film is a deeply disconcerting meditation on the social and sexual repression that would foster a deep seeded anger and resentment in an entire generation, eventually leading to the organized hate and systematic murder committed by the Nazis. Haneke isn't trying to place one single explanation for the Holocaust here, The White Ribbon is an exploration of the roots of evil, a look at how and why the seeds of hate are planted in the hearts and minds of the young. 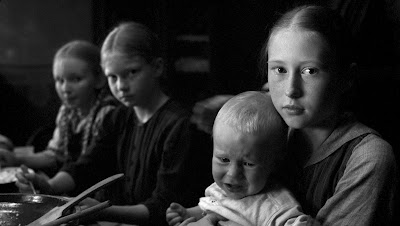 Left to right: Kristina Kneppek as Else, Stephanie Amarell as Sophie, Bianca Mey as Paula, Mika Ahrens as Willi (the Farmer's other children). © Films du Losange, Courtesy of Sony Pictures Classics.
The haunting black and white cinematography enhances the feeling that we are watching some sort of contemporary portrait of these people, like an old photograph of people long forgotten. People never seem to smile in those old photographs, lost to time, forever frozen with a grim countenance. So too are the characters that populate The White Ribbon. The adults are stern and severe, the children sullen and oppressed, any glimmer of youthful happiness soon stamped out of them by a strict religious regime. It is a film every bit as bleak as any other Haneke work, maybe even more so. Its chilling effect echoes into our own time, not just as a historical curiosity. The suppression of doubt, the discouraging of healthy sexual exploration, is not only wrong, it's dangerous.

Haneke has made a classically minded film with decidedly modern sensibilities. Its disturbing ambiguity isn't as frustrating as some of Haneke's other films. Here, it enhances the film's disconcerting effect. We know where it will eventually lead, but Haneke never leads us there. The White Ribbon isn't a film of answers, it is a film of questions, one that is as compelling as it is fascinating to contemplate. Haneke both enthralls and repells us, luring us into a world where all feelings are buried deep beneath the quaint and idyllic surface. The pleasure is in the exploration, and The White Ribbon is a rich and captivating film in which to explore.

Looking forward to this. I hope it shows up at the art house near me.
3:44 AM

Paula Lago said…
Stricking, breathtaking! Wonderful pohotography and performances. This is one of the best 5 films I've seen this 2009!.
Great to meet you, I'll be around.