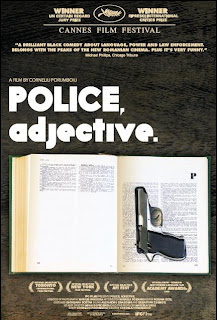 There are few aspects of modern film culture that excite me more than the Romanian New Wave. Over the latter half of the decade, Romania has consistently released some of the highest quality cinema in the world. From Cristi Puiu's The Death of Mr. Lazarescu, to Corneliu Porumboiu's 12:08 East of Bucharest, to Cristian Mungiu's 4 Months, 3 Weeks, and 2 Days, to Cristian Nemescu's California Dreamin' (Endless), it seems that each new film to come out of Romania is just as fresh and wonderful as the last.

This year, Porumboiu follows up his successful 2007 comedy about the fall of Communism, 12:08 East of Bucharest with an even drier comedy about language and the righteousness of slavish adherence to rules. There is a lot to reflect upon here. Police, Adjective is a nimble and intelligent treatise on words and the folly of law that explores the very meaning of language itself. 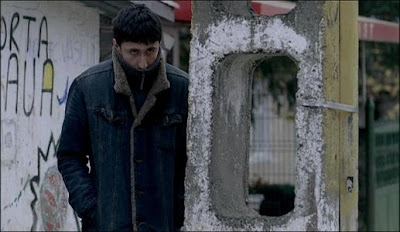 The film follows Cristi, a Romanian police officer assigned to follow a teenage boy suspected of using marijuana. That's right, not selling, not distributing, using. His superiors want the boy arrested and put in jail for the recommended penalty of three years. But Cristi has found himself in a moral conundrum. Not wanting to ruin the boy's life for a simple possession charge, especially since national attitudes toward marijuana are changing and the law could be changed soon anyway, Cristi prefers to follow the boy looking for the source of his marijuana in order to bust the dealer rather than the user. The boy was turned in by a friend of his, who Cristi suspects has an ulterior motive involving a mutual female friend, and what is on the surface a simple case is in fact anything but.

Cristi's superiors, however, will hear none of it. They want the book thrown at the boy. And while Cristi holds them off as long as possible, prolonging the investigation with endless trailing and observation, it soon becomes clear that a decision must be made - Cristi's career, or this boy's freedom. It all culminates in a riveting exchange on the very definition and nature of conscience itself, a hazy definition that leaves a muddled situation even more gray. 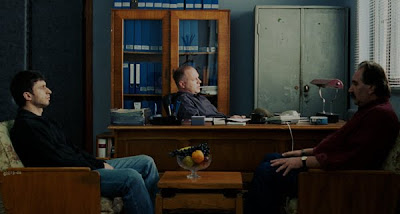 
Police, Adjective is filled with endless scenes of Cristi following the boy, observing his daily routines, examining discarded cigarette butts, highlighting the extreme absurdity of the situation he finds himself in. It is labeled a comedy, but unlike Porumboiu's last film, 12:08 East of Bucharest, the humor in Police, Adjective is much more dry. Any humor one may find here arises from the extreme ridiculousness it chronicles. But despite its focus on the absurdity, the questions it raises are no laughing matter. The climactic scene in which Cristi finally confronts his superior over the situation, filmed in one, static take, is utterly compelling stuff. Porumboiu pulls out all the stops, offering one of the most deeply thought out, intellectually stimulating debates on the meaning of words where no set definition exists. It's black and white versus gray, and an actual intelligent exploration of language unlike anything film has given us in a long time. There is a depth here that is almost literary, which gives the film its glacial pace that many may consider dull.

But without its slow pace, the film would not have the same impact that it does. This is the kind of smart, probing filmmaking that filmmakers have forgotten how to make. Porumboiu's script may be heady, but it's one of the sharpest screenplays of the year. He uses words to his advantages, and makes a fascinating film built around the idea of words themselves, and a deep, moral uncertitude that arises in the face of moral certainty. There is no comfort or absolution to be had in Police, Adjective, but for those looking for cinematic intellectual stimulation of a rare and special kind, it is a feast indeed.

Ranylt Richildis said…
I am with you on the Rom-Ren. Romanian and Taiwanese directors have been blowing my mind this past decade. They have gone nova while two erstwhile personal favourites, Italy and Japan, have gone stagnant.
11:28 AM