I recently got a look at Samson & Delilah, Australia's official entry to the Best Foreign Language category at the Oscars this year. It has been getting some mild buzz here lately, but I must say the film didn't really bowl me over. 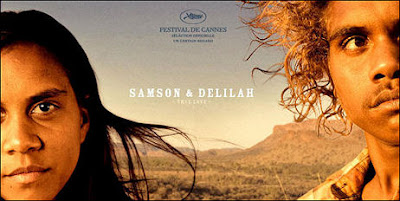 It's beautifully put together, but I never bought the central relationship. It never really made sense as to why these two characters are together, much less on the run from their respective pasts. They are kindred spirits in that regard, but what Delilah saw in the persistent, gas-huffing Samson is anyone's guess. The gas-huffing takes up most of the film's running time, and honestly seems like a distraction from the bigger themes, much like it is to the characters themselves.

The two young leads, on the other hand, are astonishingly good. They hold the film together and keep it compelling, even when the story meanders. I just can't see the Academy going for this though, despite its new found buzz after winning five Australian Film Institute awards.

I was also surprised by just how much of the film is in English, more than half I would say. More, even, than Israel's disqualified The Band's Visit from two years ago. Maybe they got away with it since it's mostly wordless anyway, the two central characters never exchange words. Either way, something doesn't seem fair somewhere.
Email Post