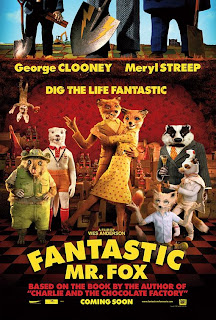 For the better part of the decade, Wes Anderson has seemed like a filmmaker boxed in by his own style. After directing what many consider to be his masterpiece, The Royal Tenenbaums in 2001, each successive film, The Life Aquatic with Steve Zissou and The Darjeeling Limited, has felt more and more sanitized and stiffly designed. For someone whose instantly recognizable style has so informed and distinguished his work, branching out while still remaining true to one's own voice can be a difficult process. It's interesting then, that Anderson's latest film, a stop motion animated adaptation of Roald Dahl's book of the same name, would be the film that finally broke him out of his stylistic rut. With this new medium, Anderson has forced himself to branch out, yielding both a natural progession and extension of his almost neurotically sanitized aesthetic. All of Anderson's films share a similar deadpan, almost melancholic humor, combined with a meticulously composed mise-en-scene. Here, presented with a medium that is completely under his control, where even the actors can be manipulated to meet his exact vision, Anderson has found the perfect outlet for his creative needs. 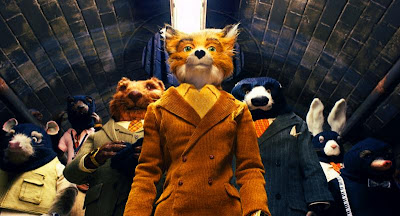 Mr. Fox and friends. Courtesy of Fox Searchlight Pictures.
Like many of Anderson's films, Fantastic Mr. Fox is essentially a family drama dressed up as an exotic adventure. Mr. Fox (George Clooney) is a chicken thief, who makes a promise to his wife (Meryl Streep) to give up his dangerous job after finding out that she is pregnant with their first child. But 12 fox years later, Mr. Fox is tired of living in a whole in the ground, and wants to move up in the world. Being a newspaper man just isn't cutting it, so Mr. Fox, along with his friend Kylie the mole (Wallace Wolodarsky), plan one last big chicken heist, raiding the three farms of Boggis (Robin Hurlstone), Bunce (Hugo Guinness), and Bean (Michael Gambon), the meanest farmers in town. But the three farmers are quick to learn of the crime, and set out to find the fox that raided their chicken houses, vowing to destroy him at all costs, sending the Fox family and all the local animals running for their lives. It's more than just a run for their lives, however. It's sort of an existential crisis, especially for Mr. Fox's awkward and lonely young son, Ash (Jason Schwartzman), who is dealing with a major inferiority complex with his well rounded and popular cousin, Krisofferson (Eric Anderson). Desperate for his father's approval, Ash finds life confusing and just wants to be a normal, athletic kid. That relationship, not unlike that of Owen Wilson and Bill Murray in The Life Aquatic, is what makes the backbone of Fantastic Mr. Fox. And for all its wry, often arch humor, the familial conflict and bonding of the Fox family provides the audience with something to connect to. Anderson's humor, while exceedingly clever, can often be insular and distancing for those who are not in tune to his particular filmmaking frequency. Here, however, it is a nearly perfect melding of filmmaker and material, and it may be his most warm and inviting film yet. 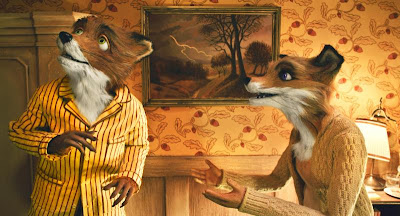 L-R: Mr. Fox and Mrs. Fox. Courtesy of Fox Searchlight Pictures.
I hesitate to call Fantastic Mr. Fox a maturation of Anderson's style, because he already reached that in The Royal Tenenbaums. But this new medium seems to have awoken a fresh creative energy in him. By working in a medium that allows him total visual and aesthetic control, Anderson, oddly enough, seems to have relaxed, and the artificiality of his style seems less pronounced. Fantastic Mr. Fox feels free of the self-consiousness that seems to have plagued his last few films. The screenplay, by Anderson and Noah Baumbach, is his wittiest since Tenenbaums, and combined with Anderson's sharp visual eye and since of timing, make Mr. Fox an incredibly funny viewing experience. It has also opened up a fresh creative avenue for composer Alexandre Desplat, who is on something of a roll this year after composing excellent scores for Cheri, Coco Before Chanel, Julie & Julia, The Twilight Saga: New Moon, and A Prophet this year. His folksy melodies, along with Anderson's typical collection of eclectic songs (including everything from "The Ballad of Davy Crockett" to Burl Ives to The Rolling Stones to The Bobby Fuller Four's "Let Her Dance") add to the film's singular atmosphere. Overall, Fantastic Mr. Fox is Anderson's least sanitized and most original work in years. It's expansion of his stylistic tendencies is both refreshing and entertaining. In what has been a banner year for animation, Anderson's work stands among the very best.
GRADE - ★★★½ (out of four)
FANTASTIC MR. FOX; Directed by Wes Anderson; Voices of George Clooney, Meryl Streep, Jason Schwatzman, Bill Murray, Wallace Wolodarsky, Eric Anderson, Michael Gambon, Willem Dafoe, Owen Wilson, Jarvis Cocker, Wes Anderson, Brian Cox, Adrien Brody, Roman Coppola; Rated PG for action, smoking and slang humor.
Email Post
Labels: Wes Anderson