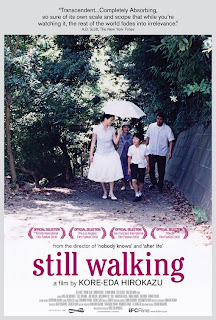 Japanese auteur Yasujiro Ozu is best known for crafting quiet family dramas about the relationship between parents and their children. In Still Walking, Kore-Eda Hirokazu seems to be evoking the old master's spirit with a tender and deeply observant tale of coming home again.

40 years old and currently between jobs, Ryota Yokoyama (Hiroshi Abe), is returning home with his new wife (Yui Natsukawa) and young step son for the anniversary of his older brother's tragic death, who died while trying to save a young boy from drowning 15 years ago. Ryo isn't enthused at the prospect of spending time with his old fashioned parents, much less spending the night with them, but he puts his game face on for the sake of the family.

His father, Kyohei (Harada Yoshio), a retired doctor, feels a certain resentment toward Ryo, an art restoration expert, and disapproves of his marriage to a widowed single mother. His eldest son, Junpei, had wanted to carry on the family legacy and be a doctor, and was in line to be his heir. Without him, he feels a sense of failure. 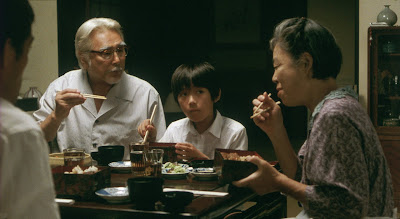