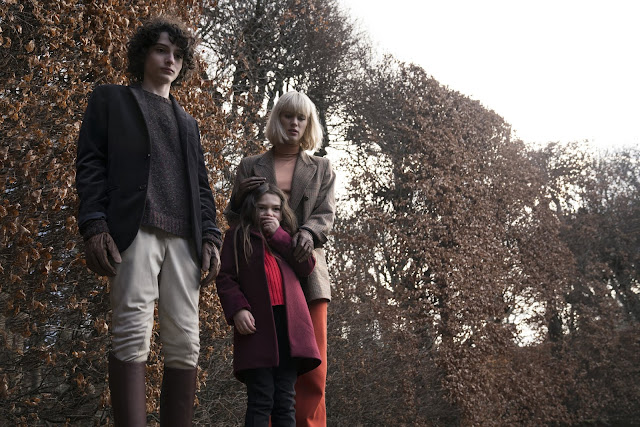 January horror tends to be a wasteland, but if the twin "F" Cinemascore ratings (the first received by any film in three years) earned by The Grudge and now The Turning are any indication, then January 2020 is one for the ages. 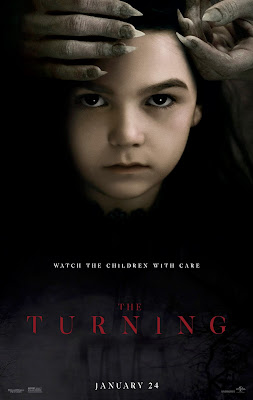 The nonsensical Grudge absolutely earned its abysmal score with a mixture of lazy writing, ugly cinematography, and abysmal plotting, but I'm not convinced that The Turning (directed by The Runaways' Floria Sigismondi) really deserves the hate being thrown its way. Many of the negative reactions and poor reviews seem to center around the films "twist" ending, which is indeed something of a head scratcher that was intended to be a Sixth Sense-level last minute rug-pull that recontextualizes the film. The problem is it's so quickly executed that it has mostly left audiences scratching their heads rather than blowing their minds; the result, perhaps, of filmmakers who have spent too long steeped in a world that they understand but have not properly laid out for the viewers.

Based on Henry James' novel, The Turn of the Screw (which also inspired the 1961 film, The Innocents, written by Truman Capote and starring Deborah Kerr), The Turning tells the story of a college student named Kate (Mackenzie Davis) who takes a job as a live-in tutor for a young orphan named Flora (The Florida Project's Brooklynn Prince) at a gothic manor house in the country, where she lives with her older brother, Miles (Finn Wolfhard). and a creepy housekeeper (Denna Thomsen) who believes that the children's wealthy background entitles them to special privileges. It isn't long before Kate begins to suspect that the house is haunted, as strange things appear in the shadows, Miles becomes more and more sinister, and a vengeful presence seems to stalk her at night.

It's all fairly standard haunted house stuff, informed by the house's past traumas, but Sigismondi proves quite adept at conjuring an eerie atmosphere, always hiding the frightening things just off screen, allowing the audiences to catch just enough of a glimpse to make us question whether or not we had seen anything at all. Similarly, the dreamlike, fog-shrouded cinematography by David Ungaro (Coco Chanel & Igor Stravinsky) creates an indelible mood, recalling great haunted house movies of yore like Robert Wise's original The Haunting and Alejandro Amenábar's The Others. That idea of questioning our own eyes comes back into play in end, in a twist that's not a *bad* twist, per se. It’s just poorly executed, coming at us so fast that it leaves the audience confused rather than unsettled.

On the plus side, Brooklynn Prince is terrific, as is Finn Wolfhard. The fact that neither is really trying to do the typical “creepy kid” thing makes those moments more unnerving, and Prince's precociousness is consistently magnetic. For most of the film, The Turning is a solidly crafted, old-fashioned haunted house chiller with some decent scares and anchored by strong performances, but it goes off the rails so wildly in its last few minutes that it nearly ruins the entire picture, leaving such  a bad taste in the mouth that it resulted in the rare "F" Cinemascore rating from audiences. But it seems unfair to dismiss the entire film due to its last 5 minutes. The finale is undeniably a massive miscalculation on the part of the filmmakers, one that undercuts much of the accumulated suspense of the story. But in no way is this film the unmitigated disaster that its reputation would suggest. It's a thoroughly decent, classically structured haunted house chiller hampered by an extremely ill-conceived ending that undermines much of the goodwill built up by Sigismondi's hauntingly elegant direction.