Birds of Prey, the sequel, spin-off, or whatever you'd like to call it to 2016's Suicide Squad, marks one of the most impressive jumps in quality from first film to second film that I can recall. Suicide Squad went on to gross over $700,000,000 worldwide, which surely marks one of the highest grosses for a film no one seems to actually like. 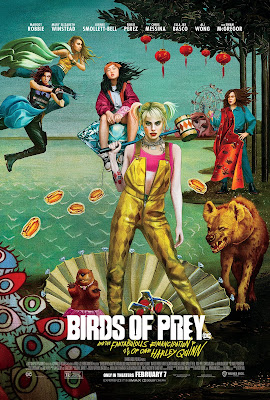 To its credit, Birds of Prey (subtitled And the Fantabulous Emancipation of One Harley Quinn) seems to have learned quite a few lessons from the mistakes of the garish Suicide Squad; lowering the stakes, streamlining the story, doing away with Jared Leto's much maligned Joker, and placing Margot Robbie's Harley Quinn front and center. The film opens with Harley getting kicked out on the street after being dumped by the Joker. This leads to an act of revenge that lands Harley in hot water with a host of Gotham goons who've had it out for her for years, but couldn't touch her as long as she was the Joker's girlfriend. Now everyone from criminals to cops seems to be out to get her, with one crime boss in particular, the ruthless Roman Sionis (Ewan McGregor) determined to track her down.

Pursued by criminals and cops alike, Harley is soon forced to band together with four other women - disgraced detective Renee Montoya (Rosie Perez), assassin Helena Bertinelli (Mary Elizabeth Winstead), and Sionis' disgruntled driver Dinah Lance (Jurnee Smollett-Bell), to protect a young orphan (Ella Jay Basco) from Sionis' wrath. Each one bringing their own unique skills and their own grudges against Sionis in order to dismantle his ruthless criminal enterprise once and for all.

Birds of Prey more closely resembles more serious action films like John Wick and Atomic Blonde than it does its predecessor, embracing its R-rating and tearing into its bruising action scenes with relish, with the tongue-in-cheek humor of the Deadpool films. Cathy Yan directs with a stylish verve that actually recalls Tim Burton's Batman films, especially in the film's funhouse finale, where the carnivalesque sets turn into a kind of Luis Buñuel-inspired nightmare. It's great stuff, trimming the excesses of Suicide Squad, lowering the stakes, and giving us more of its best elements - namely Robbie's Harley Quinn. Birds of Prey replaces world-ending stakes and evil sorceresses of Suicide Squad with a more localized crime drama, and it's all the better for it, giving the new group a chance to congeal without working so hard to tie it into a grander narrative.

In fact, the film succeeds mainly because it does feel so removed from the rest of the DC universe. Despite a few throwaway references to Batman, the Joker, and the events of the previous film, Birds of Prey mostly stands alone. Robbie is the film's strongest asset but Yan (whose only other credit is a Chinese film from last year called Dead Pigs that never got an American release) displays a commanding visual eye and a knack for combining comedy with serious, sometimes brutal, action. It's a gleefully over-the-top, candy-colored comic book spectacle that finds a pleasing balance between character and action that puts it a cut above its superhero peers.