From the Repertory | February 2020

Spotlighting some of this month's notable home video releases.

ALL ABOUT MY MOTHER (The Criterion Collection) 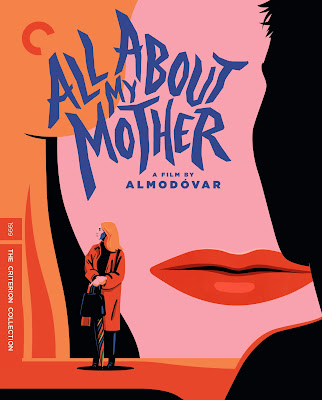 Before the release of Pain and Glory last year, All About My Mother (1999) stood as Pedro Almodóvar's most personal film, an aching and warmhearted tribute to motherhood, and especially his own beloved mother, who passed away later that year. While Pain and Glory dealt more directly with Almodóvar's life (and his relationship with his mother, specifically), All About My Mother took inspiration from his life and turned it into an ode to motherhood itself.

After her son, Esteban (Eloy Azorín), is tragically killed in an accident while trying to get the autograph of one of his favorite actresses, Manuela (Cecilia Roth), heads to Barcelona to start a new life. Once there, she becomes a kind of surrogate mother to a motley band of misfits - a pregnant nun with HIV, a transgender sex worker, and lesbian actress Huma (Marisa Paredes), whose co-dependent relationship with her drug-addicted girlfriend, Nina (Candela Peña), leaves her looking for direction and stability. It is here where Manuela grows closer to her son than ever, recapturing the spirit of what it means to be a mother, and coming to terms with her own inner trauma.

It is Huma's face that we see emblazoned on a mural, her red lipstick stark against her pale face, Manuela dwarfed and illuminated by her Technicolor grandiosity in a similarly striking red coat. That image has come to define the film in many ways - first of all in Almodóvar's trademark oversaturated Technicolor brilliance and second for its singular sense of melodramatic melancholy. All About My Mother is a melodrama, make no mistake, rooted in classical Hollywood and steeped in references to films such as All About My Mother and A Streetcar Named Desire. It's the fantasy of a young boy growing up queer, surrounded by powerful women of all stripes and raised on a diet of Bette Davis and Joan Crawford. And yet, for all the film's purple prose and soap opera dramatics, Almodóvar never loses sight of his characters' simple humanity. It's also a spiritual sequel of sorts to Women on the Verge of a Nervous Breakdown, but here Almodóvar's exploration of friendships between women feels more complete, more real - less a caricature and more deeply felt - a film of longing for a lost childhood by a filmmaker honoring the women who made him who he is, and a thing of great and tremulous beauty. 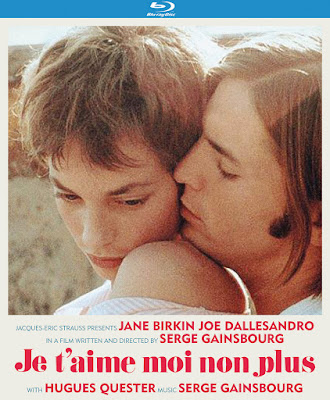 Looking back on cinema's great romances - Gone with the Wind, Dr. Zhivago, Sunrise: A Song of Two Humans, Brief Encounter, you'll be hard-pressed to find one as uniquely tragic as Serge Gainsbourg's unconventional and completely uncompromising Je t'aims moi non plus (1976).

Its romantic leads are gay truck driver, Krassky (Joe Dallesandro), and  tomboyish truck stop waitress, Johnny (Jane Birkin), whose chance encounter leads to an unusual and unexpected romance that defies gender and sexuality, even as it arouses the jealousy of Krassky's partner, Padovan (Hugues Quester). At the initial meeting, Krassky mistakes Johnny's slight, tank top-clad frame for a man's, but is taken aback when he discovers that she is, in fact, a woman. Yet he can't help but be drawn to her boyish masculinity, and the two embark on something that is at once new and frightening for them both, as Krassky finds himself unable to perform sexually unless he takes Johnny from behind, a source of both frustration and comedy-by-repitition.

What makes the film so remarkably ahead of its time is the way it critiques the very idea of gender and deconstructs sexuality into something thoroughly modern and forward thinking. In Gainsbourg's sweltering, deeply horny vision, sexuality and gender are fluid, and the attraction between Krassky and Johnny transcends both. It's a carnal attraction, even when it runs up against the practical physical barriers of genatalia - but they even manage to find a way around that. They desire each other in a deep, almost animalistic way, and the refuse to let something as simple as what sex organs the other one has get in their way.

Gainsbourg addresses sex in such a frank and uninhibited way that it's astonishing - Je t'aims moi non plus relishes in the languid nudity of its two leads in a way that feels carnal yet un-exploitative. The film manipulates the stereotypical social signals of gender - she has short hair, he has long hair - in often subtle ways, undercutting masculine/feminine iconography in order to create its own language. It's as if Gainsbourg is exploring the very idea of sexuality - what it means to feel attraction and lust for another human being, to connect on a level beyond sex, and he does it in a consistently electrifying loose, hangdog style that emphasizes the carefree nature of their existence. It's one of the great unheralded cinematic romances of all time - a love story like no other that deserves a place in the canon of all-time classics. 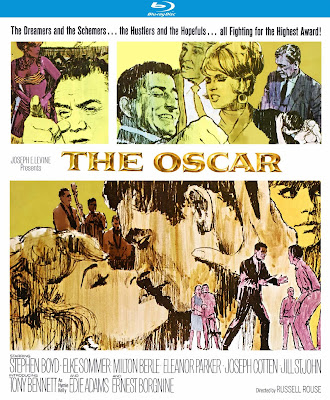 The Oscar remains perhaps one of the most infamous Hollywood disasters of all time, a star-studded spectacle, parts of which were actually filmed at the 1964 Academy Awards, and adapted from a popular novel by Richard Sale, the film was a box-office and critical bomb that nevertheless went on to be something of a camp classic.

The film centers around the rise of movie star Frank Fane (Stephen Boyd), a devil-may-care conman who spends life on the road with his partner Hymie Kelly (Tony Bennett) touring a two-bit burlesque act that soon puts them on the run from the law. That's where he stumbles into acting, his unapologetic boorishness catching the eye of a casting director who gets him on stage and eventually in front of the camera. But when faced with the prospect of waning popularity and the loss of a lucrative contract, he hatches a scheme with the help of a ruthless private eye (Ernest Borgnine) to ensure that he will win an Oscar and maintain his status in the cutthroat world of Hollywood, no matter who he has to throw under the bus.

Filled with hilarious melodrama and overripe dialogue, The Oscar features cameos from the likes of Edith Head, Frank Sinatra, Merle Oberon, Nancy Sinatra, Hedda Hopper, and Bob Hope in an attempt to capture the sweep and grandeur of Hollywood, but it's all just too silly to take seriously, descending into soapy histrionics that feel like they seem like they were written by someone who has no grasp on human interaction or relationships. Still, it's worth watching for the truly bizarre plotting and dialogue, which plays like a bad daytime soap opera complete with dramatic music stingers. And despite its scathing reviews, the film still managed to eke out two Oscar nominations - one for Art Direction and another for perennial nominee Edith Head's costumes. 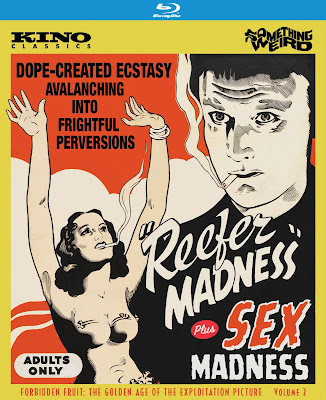 Perhaps one of the most infamous exploitation films of all time, Louis J. Gasnier's 1936 anti-marijuana propaganda piece, Reefer Madness (aka Tell Your Children) became a midnight movie sensation in the 1960s due to its unintentionally hilarious depiction of the "dangers of marijuana." The film was designed as a warning to parents about "public enemy number one," and centers around a young man who is made to believe that he committed a murder while high on pot. The film is strictly an amateur-hour production, filled with laughably over-the-top acting and a silly sense of self-righteousness that make it the perfect exploitation camp classic.

Also included on this new release from Kino Lorber as part of their "Forbidden Fruit: The Golden Age of the Exploitation Picture" series is Dwain Esper's 1938 film, Sex Madness, a film that takes the moralistic lecturing of Reefer Madness to new heights in its crusade against extramarital sex and the scourge of gonorrhea. Featuring graphic depictions of STD wounds, and a plot about a group of teenagers whose inability to say "no" lead to life-long afflictions of venereal disease, ruining marriages and destroying their lives for one night of passion. Even more amateur-ish than Reefer Madness, Sex Madness may spend most of its brief running time wagging its finger at its audience, but its sensationalistic subject matter was clearly designed to titillate while preaching a very different message, which is part of what makes these films so goofy. They're not "good" by any stretch of the imagination, but they're such a joke now that it's hard not to get a kick out of them.