Jack London's classic tale of survival in the Yukon territory has been adapted for the screen more than once, but surprisingly there seems to be no single definitive version of The Call of the Wild despite being one of the most famous adventure novels of all time. A 1976 version starring Charlton Heston seems to be the highest profile, but the rest are mostly TV movies that failed to make much of a splash. 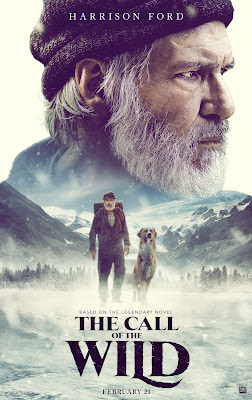 The latest iteration, starring Harrison Ford as Klondike prospector, John Thornton, seeks to change that in a new big screen adventure from 20th Century Fox, now flying under new Disney management as 20th Century Studios. It's fitting that the film has now found a home under the Disney banner, because it fits right in with such classic Disney adventure films as The Incredible Journey, The Swiss Family Robinson, and Homeward Bound; and while its impact may be somewhat blunted by the overuse of some questionable computer imagery to its render canine hero, at it heart it's a tried-and-true tale of survival and the romance of the untouched wilderness.

While Ford may receive top billing, the hero of the story is Buck, an oversized mutt who finds himself kidnapped from the lap of luxury and on his way to the Klondike at the height of the Gold Rush, where he is sold as a sled dog to a pair of intrepid mail carriers (Omar Sy and Cara Gee) and learns to embrace the wild dog within. He soon finds himself teamed up with Ford's grizzled prospector, who came to the Yukon Territory not in search of gold, but in search of himself after the death of his son. Together they head off the map in pursuit of the adventure of a lifetime, pursued by a vengeful dandy (Dan Stevens) who believes they're hiding the secret to a fabled treasure hidden deep in the unexplored wilderness of the Yukon.

Buck is a completely computer generated character, and his obviously animated look can be distracting at times, with his expressive interactions with his owners make him almost human (not surprising, given that much of the character was created through human motion-capture technology), but if you can get past the lack of believability, The Call of the Wild is a charmingly old-fashioned adventure that's often unexpectedly low-key. Director Chris Sanders, making his live-action debut after helming such animated fare as How to Train Your Dragon and Lilo & Stitch, isn't afraid to let the narrative unfold at a deliberate pace, taking the time to step back for some nice character moments, making the action set-pieces feel all the more perilous.

Despite its over-reliance on visual effects to create its central character, it's an unhurried and straightforward narrative, a welcome respite from the often apocalyptic stakes that so often dominate films with budgets this size. The script may lean too heavily on Ford's narration (and in the end it doesn't make a lot of sense), but Ford remains every bit the appealingly gruff star he's always been, and it's difficult not to become swept up in the grand romantic sweep of it all. It often feels like a throwback to the cinema of a simpler, less complicated time; an old school adventure about a big dog with an even bigger heart that feels tailor-made for the old cliché - "they just don't make 'em like this anymore."