Hot off the success of Breathless that heralded the arrival of the French New Wave to the world, Jean-Luc Godard defied expectations with his sophomore feature, Le Petit Soldat, and began what would become a lifelong passion for using cinema as a revolutionary political tool. However, unlike later films like La Chinoise, Tout va Bien, or 2 or 3 Things I Know About Her, Godard doesn't yet seem to have a fully formed worldview. 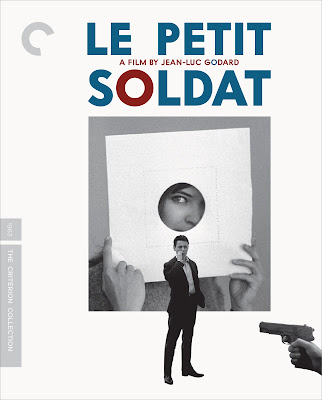 Originally shot in 1960 on the heels of Breathless, Le Petit Soldat wouldn't be released until 1963 due to objections from French censors who deemed the film's politics to be seditious. Where Breathless was a fresh and stylish caper in the tradition of Bonnie and Clyde, steeped in the classical Hollywood idiom that had so fascinated Godard as a critic, Le Petit Soldat is a grim, gritty film that takes a deep dive into simmering tensions in France resulting from the conflict in Algeria. Constructed as a spy film, Le Petit Soldat takes a right-wing French terrorist (Michel Subor) and a left-wing supporter of the Algerian cause (Anna Karina) and makes them fall in love against the backdrop of social unrest in Geneva. Controversially, it is the Algerians who are seen committing atrocities against the French, in an extended  sequence in which Stubor is tied up in a bathtub and tortured in order to extract information. While it is mentioned that the French also committed atrocities against the Algerians, and the film was banned in part because of a scene in which Karina insists that the French will lose because "have no ideal," it was this sense of moral ambiguity and "both sides-ism" in the face of colonialism that shows Godard as an artist without a fully formed ideology.

While this would certainly come later after Godard famously embraced Marxism-Leninism and the teachings of Mao Zedong, Le Petit Soldat is perhaps more interesting for what it foreshadows in Godard's career than anything contained in the film itself. Karina is a vision, of course, and Godard's camera eyes her lovingly. In fact, it is rumored that Godard actually extended the shoot in order to court her (they would be married the next year), according to cinematographer Raoul Cotard in Colin MacCabe's 2003 biography of the filmmaker. But it spends much more time with Stubor's right-wing radical, with relatively little criticism, a strange deviation from Godard's later work and a sign that Godard wasn't quite sure what he was trying to say here at all - the film's moral relativism is often more frustrating that fascinating, and its lack of a point of view makes its moral equivocations between imperialists and insurgents seem murky rather than insightful.

One could call this film the beginning of Godard's political awakening, but it's not fully formed - it's the work of an artist searching for his voice, for his ideology, looking for the ever-shifting truth that cinema brings at 24 frames per second. This idea of shifting truth is very much present in Le Petit Soldat, but it's as much due to Godard's lack of real political awareness than it is an intentional thematic device. It's a film with an author in search of a theme, and he would find it eventually, but only years later, leaving Le Petit Soldat as something of a fascinating artifact, a planted seed in Godard's career that would blossom into something much more radical and pointed later on as he left the aesthetic artifice of cinema behind to embrace its power as a tool for a revolution that would never come.