The story of Hansel and Gretel is perhaps one of the most famous fairy tales of the Brothers Grimm, its story of two children who are lured into the woods and eaten by a witch serving as a warning to generations of children not to accept gifts from strangers. 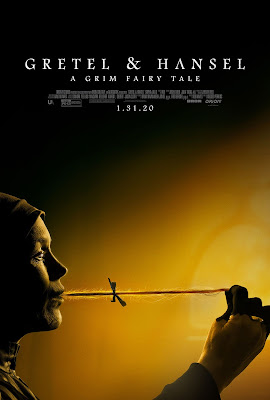 Director Oz Perkins' 21st century re-imagining in Gretel & Hansel provides a new twist on the oft-told tale, centering Gretel in the narrative and turning it into a story of female empowerment tinged with giallo horror. While the film has been frequently (and understandably) compared to Robert Eggers' The Witch (and not without reason), the film I found myself consistently reminded of was Dario Argento's 1977 horror classic, Suspiria.  From the non-diegetic neon lighting to R.O.B.'s synthetic prog-rock score, Gretel & Hansel feels right at home amongst the work of such Italian masters as Argento and Mario Bava, whose films often felt like they took place inside a nightmare where plot didn't matter so much as atmosphere and mood.

The story is familiar, of course. Hansel and Gretel are two children who are turned out by their destitute mother because she is unable to afford to feed them. Gretel (Sophia Lillis), unwilling to either join a convent or  be a lecherous country lord's housemaid, sets out on her own along with her little brother, Hansel (Samuel Leakey). It isn't long, however, before they become lost in the woods. Weary and starving they stumble upon a peculiar cabin in the woods, where an old woman (Alice Krige) offers them a spread of delicious food and shelter for the night. It soon becomes clear that something is dreadfully wrong in that house, as Gretel begins having inexplicable visions of missing children, and the old woman takes a particular interest in Gretel that seems to go far beyond her interest in Hansel, and it soon becomes clear that she's trying to push them apart for very sinister reasons.

The film is steeped in a sense of fairy tale lore, its expressionistic production design Jeremy Reed and Christine McDonagh contributing greatly its overall feeling of dread and despair. Perkins very wisely never attempts to dot all the I's or cross all the T's, leading to a film that is less concerned with plotting than it is getting under the audience's skin. The lighting is abstract and evocative with its vibrant blues and pinks, the music completely incongruous to the time period it's representing, and yet this kind of surrealistic take on the material creates a kind of dream logic that makes it all the more unsettling.


It's also just as much about writing your own story and forging your own path as Greta Gerwig’s Little Women, history, myth, and fate be damned. Your ending isn’t written until you write it yourself and your circumstances do not define you. Gretel & Hansel's recasting of Gretel as the heir apparent to the witch not only empower Gretel as a character but completely reframes the narrative. It's no longer a story about the dangers of accepting gifts from strangers, but of reclaiming the narrative of victimhood and turning it into one of personal strength. Gretel is no longer the passive child that Hansel is; if the witch used the power granted to her by her victimhood for revenge, Gretel seeks to use it in order to heal, to reclaim her story from those who would seek to use it for their own gain. Here, the fear of the old woman, the fairy tales that cast women as old crones who seek to eat little children in order to get them to obey, becomes a relic of the past as Gretel reshapes the narrative in her own image, taking control of her own destiny and burning down the misogynist misconceptions of the past. It's a bracing, feminist take on a familiar tale that makes it feel startlingly fresh.

After a run of substandard January horror films, Gretel & Hansel not only feels like a breath of fresh air, it's an art film that somehow managed to secure a wide release from a major studio. Anchored by strong turns by It's Sophia Lillis and especially the incomparable Alice Krige (always a welcome presence) as the witch, Gretel & Hansel is a throughly original take on a classic legend that makes the surreal feel terrifyingly palpable like a childhood nightmare come to life, a twisted fairy tale once meant to scare children turned into a haunting allegorical fable for adults.