Once scheduled for release last Thanksgiving, Paramount's Sonic the Hedgehog was delayed until Valentine's Day of this year due to fan outcry over the design of the titular blue hedgehog. Granted, the beady eyes and human-like teeth seen in the original trailer last spring was a far cry from the design of the iconic Sega video game hero, but by all accounts the retooling of the special effects cost north of $30 million and bankrupted the visual effects company that designed them. 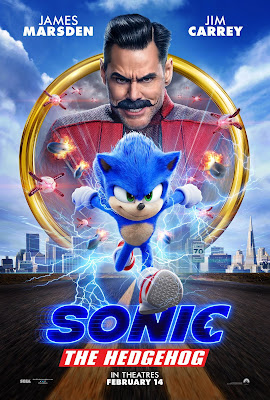 It's a sad situation all around, because now that the film has been released, it's clear that the revamp just wasn't worth it. Sonic the Hedgehog is the epitome of soulless studio product, a paint-by-numbers action comedy that feels like the reheated leftovers of an early 2000s buddy comedy. It's mildly entertaining at times, mostly due to Jim Carrey's delightfully unhinged performance as the villainous Dr. Robotik, but the lifeless script gives him little to work with, awkwardly shoe-horning in product placement for everything from Zillow to Olive Garden.

Adapted from the popular series of video games, this iteration of Sonic (Ben Schwartz) is an intergalactic rodent whose power has turned him into a fugitive from his home planet. After living alone on Earth for several years, during which he forms one-way "friendships" with locals he has never actually met, an accidental power surge alerts government authorities to his presence. In turn, the government sends Dr. Robotnik, an evil scientist bent on studying Sonic to uncover the source of his power and use it for his own nefarious gain. So Sonic turns to small town sheriff, Tom Wachowski (James Marsden) for help, and the two end up on an adventure to reclaim Sonic's magical rings so he can escape Earth and find a new save haven where his power will be protected. But as the two grow closer, they soon find themselves forming a unique friendship and learning that the grass isn't always greener on the other side.

It's a tried and true message, but the way Sonic frames seems to suggest that following your dreams isn't worth it (neither seem to have any real connection to the small town they call home). But its muddled message is the least of its problems - its biggest issue is the fact that it's so generically constructed that any of its set pieces could be lifted and plopped into another film wholesale without missing a beat. Its standout sequences, in which time seems to slow down due to Sonic's speed while he defeats a room full of bad guys, is copied almost verbatim from Quicksilver's scenes in X-Men: Days of Future Past and X-Men: Apocalypse. It's all competently put together by first-time feature filmmaker, Jeff Fowler, but the script is so bland that the end result almost can't help but be anything but generic. It reeks of a cynical studio ploy to sell toys and boost video game sales without any thought for giving the film a personality of its own, recalling other human/CGI animal buddy movies like Hop and Peter Rabbit, which weren't that great to begin with. It's good to see Carrey backing this manic form, but you're likely to leave the theater with a nagging sense of déjà vu, having just sat through yet another assembly-line studio Frankenstein with little on its mind besides raking in cash on the back of an established piece of intellectual property.