In the last month, there have been not one, not two, but three major Blu-Ray releases from the filmography of the iconic French actor, Jean-Pierre Léaud. Two from the height of has career as a muse of the French New Wave muse, and his most recent role in Albert Serra's remarkable The Death of Louis XIV. After a lifetime of great performances, from his iconic freeze-frame in Francois Truffaut's The 400 Blows, to countless Jean-Luc Godard films (Alphaville, Pierrot le Fou, and Masculin Feminin, just to name a few), to Bertolucci's Last Tango in Paris, and Jean Eustache's The Mother and the Whore, to Aki Kaurismäki's Le Havre and La Vie Die Boheme, and Jean Cocteau's Testament of Orpheus, Léaud has earned his place in the cinematic pantheon, having worked with some of the greatest French filmmakers of all time.

These new Blu-Ray releases provide a career-spanning look at the work of one of French cinema's greatest icons, whether as a mouthpiece for the political musings of Jean-Luc Godard or as an actor in his own right. Together they form an essential piece of the actor's filmography, and looking back over the three films, it's not hard to see why the man is now a living legend - not just for his performances, but for the chances he took with the filmmakers with whom he chose to work. 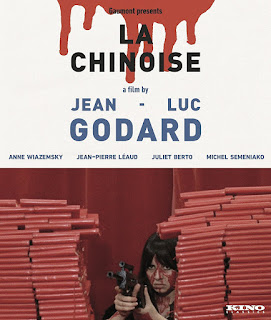 The camera becomes a literal weapon in Godard's La Chinoise, the film that marked the beginning of the director's radical Maoist period. While his previous film, 2 or 3 Things I Know About Her, was perhaps the first indication of the political direction he was heading, La Chinoise finds Godard at his most radically experimental, exploring the conflicts in Leftist politics in Europe at the time, between those who preferred Soviet Marxism-Leninism, to those who (like Godard) preferred the Chinese Maoist ideas that brought forth the Cultural Revolution.

La Chinoise (The Chinese) follows a band of student revolutionaries who are holed up in their apartment, surrounded by copies of Mao Zedong's "Little Red Book," extolling the virtues of communism while parsing the philosophical differences in their viewpoints and preparing for a revolution that may never come. It's almost more of an essay than a film, and its intentional use of Brechtian alienation techniques make the film a difficult watch (especially when Godard is advocating for terrorism as a legitimate avenue of political and cultureal change). At the same time, it's difficult not to be drawn in by what Godard is doing here. This is the work of a man trying to figure out where he stands. La Chinoise is filled with long, rambling, sometimes disjointed philosophical discussions of Leftist politics and foreign policy.

It is very much a product of its time (the Vietnam war hangs heavy over every frame), but there are times when it feels strikingly immediate. It is not the work of a filmmaker who is out of control; Godard clearly has a strong vision for what he's doing here. Every frame is alive with vibrant, perfectly coordinated primary colors (which really pop on Kino's new Blu-Ray), so that even when he's revealing the camera or the slate or other means of production, nothing ever feels random or unintentional. La Chinoise is not a manifesto, it's an exploration, not so much and advocation for revolution but a preparation for its inevitability. Godard is very intentionally exploring ideas here. And while he eventually disappeared up his own ass when he joined the Dziga Vertov group and started and started churning out insufferable political treatises, La Chinoise is a fascinating portrait of an artist trying to understand his own place in the world, both as an artist and as a human being. It's not an easy film, by any means, and it isn't always a particularly good one, but as a piece of film history, it's an undeniably intriguing piece of work. 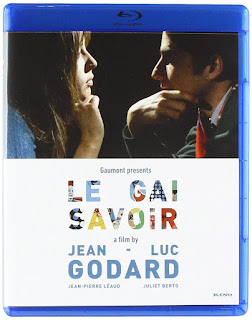 
By 1969, Godard was so deep into Leftist politics that he was barely recognizable as the filmmaker behind Breathless and Band of Outsiders. At this point in his career, he was experimenting with Brechtian alienation techniques, eschewing anything he saw as hewing too close to Hollywood escapism, deciding instead to craft his films without any regard for narrative flow in order to convey ideas. Cinema became his weapon in a Marxist-Leninist revolution that would never come.

Le Gai Savoir (Joy of Learning) was released after the French student uprising of May 1968, of which Godard was very much a part. The result is perhaps Godard's most stylistically radical work. While the ideas put forth in La Chinoise (1967) were arguably more extreme, Le Gai Savoir takes Godard's experimentation with film form to the next level. In the film, Godard encourages the audience to intellectually "start from zero," to return to the basics and to re-educate and re-orient our way of thinking. Like a Marxist Yoda, Godard is telling us that we must "unlearn what we have learned." Rather than preach at us, Godard himself attempts to dismantle cinema itself, throwing out all convention and traditional filmmaking techniques, and invents a new cinematic language to examine political philosophy.

The title is somewhat ironic, as you'd be hard-pressed to call Le Gai Savoir  "joyful," but there is a playfulness to Godard's experimentation to that is undeniable. He frames his characters in darkness, two people (played by Léaud and Juliet Berto) sitting in a void of nothingness, discussing political philosophy. What is art's role to play in the revolution? How can art affect change? Is art inherently political? Godard never provides answers, he is constantly asking questions. Le Gai Savoir  isn't a film designed to educate so much as open the mind. But isn't that the purpose of education in the first place? It's a consistently engaging dismantling of film form. It may not be anyone's definition of "entertaining," but watching Godard re-invent the language of cinema is nothing short of thrilling. It's one of his most visually striking films, a dazzling display of ideas and form designed not only to make the audience question the role and purpose of art, but their own place in society and how one engages politically with that art. Godard redefines cinema, and turns Le Gai Savoir into a film like no other. 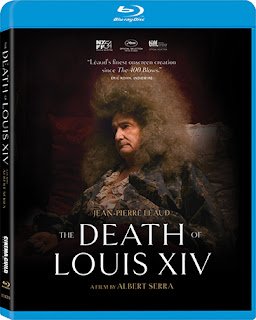 In Albert Serra's The Death of Louis XIV, the face of Léaud, as France's longest reigning monarch, Louis XIV, lies shrouded in a great dome of hair, his regal features dimmed but no less striking when lost in the giant pompadour wig. He is a monarch in decline, a dim shadow of a man about to be lost in time, surrounded by groveling yes-men and sycophants whose bumbling attempts to affirm his every whim are in fact hastening his death rather than preventing it.

There's something truly haunting about watching one of France's most legendary actors in such a role. The Death of Louis XIV almost feels like a meta-theatrical elegy for a titan of the silver screen (like The 400 Blows, its most powerful moment is a freeze-frame of the actor's face). But it is also a quietly chilling portrait of fading power.

When word of the Sun King's quickly deteriorating health gets out, friends, acquaintances, and attendants flock from all over to catch one last glimpse of him. By the end of the film, they literally tear him apart, all but feasting on the remains as they divide him up. There's something both coldly ironic and grimly hilarious about the way they scrape and bow, politely applauding ("bravo, sire!") just because he managed to eat a bite of his meal.

Serra shoots the film like a classical drama, composing each frame like its own painting. The result is often breathtaking (it's an undeniably gorgeous film), but not without meaning. Everything is carefully arranged, the dying king is constantly bathed in a warm, glowing light, and yet the specter of death hangs over every frame. This is how power ends, aged and shriveled, with little to show for it. What good is all the extravagance and all the power when those who surround him can do little to help? Without their leader telling them what to do, they are helpless; easily duped by charlatans and awed by the false sense of majesty now lying prone on an opulent bed.

"We'll do better next time" the head physician says directly to the camera, almost as an apology; but will they? Or is this just how we react to the idea of power? The Death of Louis XIV strips away the mythic reverence for monarchs and shows us something else, a pitiable, helpless human being with no one to turn to when death finally comes to call. It's a heartbreaking film, made even more so when Louis implores his young heir to be a better king than he. It is a quietly powerful examination of power, wealth, and mortality that lingers and troubles, anchored by a truly magisterial performance by a lion in winter.

The Cinema Guild Blu-Ray also includes an insightful essay by my former In Review Online colleague, Jordan Cronk, as well as Serra's 2013 tribute to Rainer Werner Fassbinder, Cuba Libre, a mesmerizing short film that powerfully captures Fassbinder's style. But the real highlight here is the feature film itself. The Death of Louis XIV is a hushed and exhilarating stunner and one of the very best films of 2017.