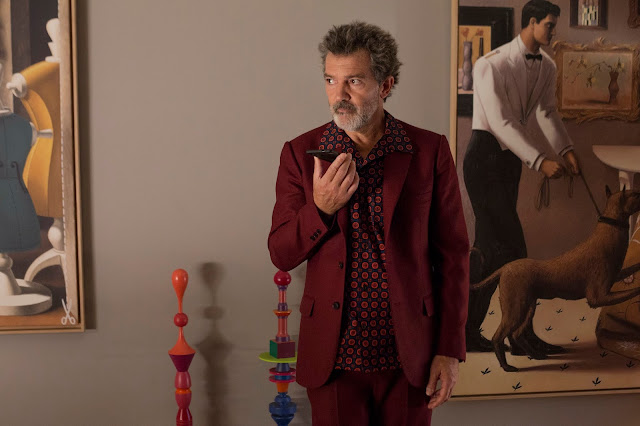 Cinema history is littered with filmmakers who turned the camera on themselves - stories of tortured artists, great men burdened great talent. It would be easy to dismiss these films as mere vanity projects, tales of self-aggrandizement by mostly male filmmakers who see themselves as saddled with great genius that no one else could possibly understand. Perhaps the most famous example of this is Fellini's 8 1/2, although Tarkovsky's Mirror and even Von Trier's The House that Jack Built could arguably comfortably in that category. 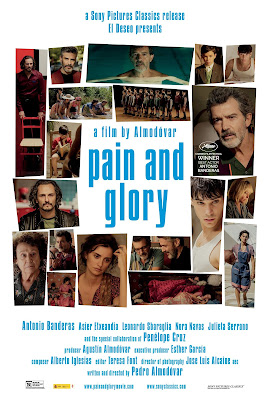 However, there's something much more humble and self-reflective in Pedro Almodóvar's Pain and Glory, an ostensible act of self-reflection that seems to flow directly from the filmmaker's heart rather than his own ego. It's a film about a legendary Spanish filmmaker (natch) named Salvador Mallo (Antonio Banderas) who finds himself at the twilight of his career. His last few films haven't achieved the same lofty acclaim as his earlier work, and he finds himself reflecting on the mistakes of the past - discarded friendships, a painful childhood, relationships that faded away. He dulls the pain with drugs and alcohol, addictions that threaten to derail any hope of a comeback, as he faces the prospect of obsolescence, a once great artist fallen into obscurity, a mere shadow of his former self.

There is no trace of ego in what Almodóvar achieves here. Pain and Glory almost feels like an exorcism, an autumnal reverie filled with pain and regret, of mistakes made and loves lost. And yet there's a glimmer of hope as Almodóvar wrestles with his demons through the medium he loves. It's a film as much about the healing power of cinema as it is about Almodóvar himself. As Mallo reckons with his conservative, Catholic upbringing (with Penelope Cruz memorably embodying his long-suffering mother), and his sexual awakening as a child in the form of a handsome illiterate painter he teaches to read, and ultimately his own addiction to drugs, one can almost feel Almodóvar breathing a great sigh of relief, laying it all bare on screen in a gripping sort of personal and artistic catharsis.

This is easily Almodóvar's finest work since Talk to Her (2002). It combines the maturity of an elder statesman the distinctly queer sensibilities that helped establish him as one of the greats in his early, more overtly sexual, work. Many of those films starred Antonio Banderas as the central figure of sexual desire - here he embodies Almodóvar, joining his old friend as an aging muse, evoking the anguished soul of an old friend whose career helped launch his own. Banderas has never been better, delivering a wistful and haunted performance filled with quiet longing and flagging sexual voractity , a distinguished former sex symbol of another time who still carries the steely glint of his former glory.

It is through Mallo, an obvious avatar for Almodóvar himself, that the filmmaker subverts the trope of the struggling genius and the women who inspired him, putting a queer twist on what has become a kind of cinematic indulgence for straight filmmakers. Here we see a gay filmmaker baring his soul and exploring the roots of his own sexuality in ways once only afforded to straight artists, and the results are bracing and often deeply moving. This is not the same Almodóvar who made Matador (1986) and Law of Desire (1987) - this is a film that finds the filmmaker in a much more reflective mode, more reminiscent of his work in Bad Education (2004), a film with which Pain and Glory shares a similar thematic outlook. Yet by the time the film reaches its wrenching, revelatory conclusion, Almodóvar manages to re-contextualize everything we've just seen. It's one of the most stunning film endings of the year, and yet it's so quietly earth-shattering that its power is almost disarming. It's the kind of film that cements Almodóvar in the pantheon of great artists, and it does so without ego or pretense, an understated glory that finds devastating beauty in the wreckage of a lifetime of mistakes and missed opportunities as only the cinema could have given us.