Review | A Beautiful Day in the Neighborhood | 2019

Marielle Heller's A Beautiful Day in the Neighborhood is a much darker, more complicated film than its marketing would suggest. While Tom Hanks' Mr. Rogers has been at the forefront of the film's marketing campaign, the film really isn't about Mr. Rogers at all; it's an emotionally thorny family drama about a cynical and wounded man coming to terms with his trauma and taking the first steps toward mending the rifts in his family. 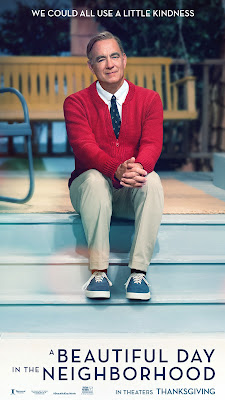 That man is Lloyd Vogel (Matthew Rhys), a journalist for Esquire magazine who is known for his often damning investigative journalism. Lloyd is a new father, and his sister is getting married (for the third time), an event that brings his own father, Jerry (Chris Cooper), back into the picture after many years apart. Jerry is dying, and wants to reconcile with his children, but Lloyd doesn't want to forgive him for abandoning his family at their darkest hour. Then, out of the blue, Lloyd is assigned to do a puff piece on Fred Rogers, legendary children's show host of "Mister Rogers Neighborhood." At first, Lloyd is resistant, but soon becomes determined to crack Mr. Rogers' kindly facade, after all, how can anyone be so nice? Surely it's all an act.

Yet the more Lloyd pushes, the more Mr. Rogers doubles down on his kindness to Lloyd, even taking a special interest in him and his family. It isn't long before Lloyd almost finds himself tortured by Mr. Rogers' unflappable belief in simple human goodness. But his determination to push Mr. Rogers' sense of decency eventually forces him to turn his journalistic insights on himself, and barely recognizes the man staring back at him from the mirror.

Heller frames the film like a feature-length episode of "Mister Rogers' Neighborhood" for grown ups, with Hanks' kindly presence guiding us through Lloyd's trials and tribulations. It's an ingenious structural choice that allows Heller, along with screenwriters Noah Harpster and Micah Fitzerman-Blue, to acknowledge that the emotions of childhood through which Mr. Rogers helped guide countless millions of children eventually give way to the much more complex problems of adulthood. And yet the root of them isn't so much different than what we experienced when we were kids. Through his interviews with Rogers, Lloyd discovers a more complex man with much deeper, complicated feelings than he expected, but he also discovers a man with a profound understanding of the intricacies of the human heart.


A Beautiful Day in the Neighborhood is a remarkable film. At its heart it's very much about about kindness and self-love and all those things Mr. Rogers has come to represent. But it’s also about much more than that - dealing with trauma, and learning to let go of anger. But perhaps most of all, it acknowledges that these are painful things, and that it’s OK feel and acknowledge those things. For Mr. Rogers, acknowledging negative emotions wasn't a weakness, it was the very root of strength, of taking control of ones emotions and oneself.

This movie goes to some dark places, but it emerges hopeful. No other film this year has felt quite so cathartic, as if Mr. Rogers is somehow exorcising our accumulated pain from beyond the grave. This is in no small part due to Hanks' uncanny performance, which doesn't seem so much an imitation as a channelling of Rogers' spirit. But the film isn't really about Mr. Rogers as much as the idea we all have of him - and rather than deify him, it humanizes him, as a human being like all of us, but who found a way to deal with the hurt inside. There's some really emotionally complex, powerful stuff here, and Heller navigates it with great care, deftly speaking to the part of all of us where child that we were meets the adult that we are.

That final shot of Mr. Rogers alone in his studio banging on his piano are going to stick with me for a long time. They’re beautiful notes, but those few dissonant chords suggest a more complex emotional life than perhaps we saw. And yet nothing about him feels fake or inauthentic. Mr. Rogers was the man we saw on TV. He remains a symbol for all that is kind and good; but the film, like the man, invites us to grapple with and acknowledge the negative feelings inside. People hurt. They feel sadness, anger, regret. But to embrace those things, to meet them head on and wrestle with them rather than sweeping them under the rug - that’s a good feeling.