On paper, there are few more enticing teams than Ian McKellan and Helen Mirren, two legends of the British stage and among the finest actors of our time. This was clearly not a fact lost on director Bill Condon, who hired them to co-star in his screen adaptation of Nicholas Searle's novel, The Good Liar. 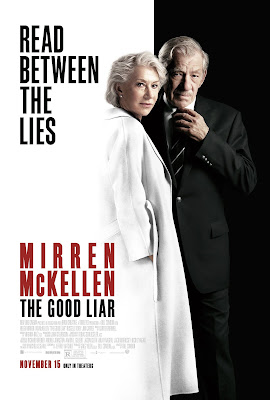 The resulting film isn't really up to the talents of either actor, but it's such a pleasure to watch these two at work that it hardly matters. The Good Liar is a pulpy beach read at heart, and both Mirren and McKellan tear into the purple material with great relish. McKellan plays Roy Courtnay, a sleazy septuagenarian who preys on wealthy women by setting up dates online, earning their trust, then eventually draining their bank accounts before moving on to the next target. His latest unsuspecting victim is Betty McLeish, a loving grandmother and recent widow with a sizable savings who is looking for a companion. And she finds one in Roy, or so it appears. But as Roy zeroes in for the kill, lulling Betty into a sense of false security, it becomes more and more apparent that all is not as it seems, and that Roy's lifetime of lies may have finally caught up with him.

There is a twist, of course, anyone who saw one of the film's prolific trailers should have picked up on that right away, but Condon does a good job of keeping the audience on its toes, always waiting for the shoe to drop, to the point that we begin to wonder if it's coming at all. Where the film falters is in its delivery - a laboriously expository scene that has all the personality of a villain laying out his devious plan to the hero just before he's killed. Condon also spends far too much time dealing with the intricacies of Roy's convoluted banking schemes, and the little bank transfer machines that look like ancient calculators feel like the most contrived of cinematic devices to make something inherently un-cinematic seem interesting.

Yet despite the film's somewhat cumbersome plotting, Mirren and McKellan are a constant pleasure to watch, and Carter Burwell's lilting score adds a sense of depth to the mystery. The film makes a last-minute attempt at some modern-day relevance with some nods to the #MeToo movement and the idea that those who are complicit with Nazis, even adjacently, can never escape justice for their crimes, it feels a bit incongruous with other otherwise surface-level pleasures it offers. The Good Liar wants to be both a breezy, entertaining mystery and a knowing social thriller, and its attempt to address those issues come across as clumsy at best, insincere at worst. It only really succeeds when it embraces its pulpy roots, and that's mostly thanks to the talents of its legendary stars. When we're in their hands The Good Liar feels like pure movie magic, but once the facade is removed its seams begin to show. Like its titular liar, Condon fools us into thinking we're watching a great film, when in reality it's merely a nicely dressed potboiler with a great cast.