While he was notoriously difficult to work with, Josef von Sternberg (who borrowed the "von" from Erich von Stroheim) was a master craftsman and one of the greatest filmmakers of the early 20th century. While he is perhaps best known for his collaborations with Marlene Dietrich (including his 1930 masterpiece, The Blue Angel), he made three films at the end of the silent era that stand among his very best 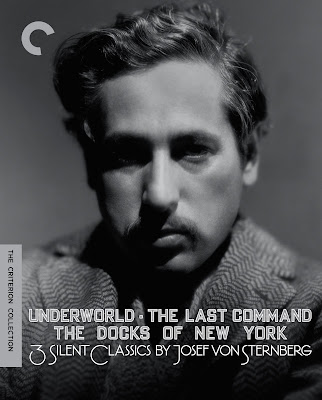 Much of his work before Underworld is either lost or truncated. After catching the eye of Charles Chaplin, Chaplin hired Von Sternberg to direct a comeback vehicle for his onetime lover, Edna Purviance called A Woman of the Sea. Chaplin was so displeased with the film that he never released it, and the film is now the only film connected with Chaplin to have been lost. Still, Von Sternberg did things his own way, and eventually landed a gig as a director-for-hire on the Paramount gangster picture, Underworld (1927). The film was an instant smash-hit that catapulted Von Sternberg into the upper echelon of filmmakers working at the time and helped popularize the gangster genre  The story of a charismatic gangster (George Bancroft) who begins to suspect that his girlfriend is in love with his best friend while he sits on death row, Underworld showcases Von Sternberg's mastery of light and shadow. Its luridly evocative look at honor among the gangsters and thieves who populate the Dreamland Cafe of Chicago is the stuff that old Hollywood dreams are made of, a shadowy tale of virtue among vice that The film is a masterwork of building tension, as Von Sternberg carefully lays the groundwork for the drama that will come to a head in its violent climax. He manages to convey so much information with so little (an entire jewelry store heist is conveyed in just four quick shots), lulling the audience into a kind of rhythm that pays off beautifully when they're all finally cornered during the climactic shoot-out.


In The Last Command (1928), Emil Jannings stars as a high-ranking Russian general who finds himself taking low-paying work as a Hollywood extra after the Bolshevik Revolution under the direction of his former rival (William Powell), a Communist spy now directing a film about the Revolution in America. Jannings won the first-ever Academy Award for Best Actor for his towering performance as a man becoming unhinged from reality, unable to tell the difference between the real Revolution and the make-believe one he finds himself recreating for the cameras.

While the film spends much of its time in an extended flashback to Grand Duke Alexander's glory days commanding the Czarist army against the Bolsheviks, where he falls in love with a beautiful spy, it's Janning's final scene that really sticks in the memory. There he is, commanding an imaginary army under the glare of the studio lights, lost in a world that no longer exists. It's easy to see why Jannings won the Academy Award, and Von Sternberg captures something really special here. While the film doesn't quite have the energy of Underworld, Jannings gives the film a morally complex center. In 1928 world sympathy laid more with the deposed Czarists than with the Communist revolutionaries, here depicted mostly as a bloodthirsty mob, but Jannings' performance is filled with both fire and humanity - he's a tyrant brought low, paying penance for a life of abusing those under him, and yet somehow we feel sorry for this man. Even his rivals realize this, after watching the madness consume him his onetime enemy can't help but be moved. It's a film unafraid to exist in shades of gray which looks even more remarkable in our own black and white times.


And finally we come to The Docks of New York, a film that demonstrates Von Sternberg's striking versatility. Whereas Underworld solidified the template for the gangster genre and The Last Command took us back to the Russian Revolution, The Docks of New York is a simple love story. George Bancroft reunites with with Von Sternberg as Bill Roberts, a stoker aboard an ocean liner who  falls for a woman he rescues from a suicide attempt. He soon finds himself caught between his love for a woman and his love for the sea, but his own moral code eventually forces him to stand up to his old bosses and embrace a new life on land.

The Docks of New York is, at its core, a song of the working class. Released a year after F.W. Murnau's Sunrise: A Song of Two Humans, it recalls that earlier film's working class milieu while presaging Jean Vigo's seafaring romance, L'atalante, which would come five years later. Von Sternberg finds such beauty in the film's grungy locales (an early shot in which the action takes place in the reflection on the water is especially lovely), examining the often disarming moments of joy and happiness even amidst the harshest of conditions. He also revisits a similar idea from Underworld, putting the protagonists in a rowdy nightclub; except this time it's not a collection of high society criminals, but a truly seedy underworld of its own. And yet even in this rouge's gallery of thieves and murders Von Sternberg finds something of value, just as his two lovers find something in each other no one else can see. The fog-shrouded shores of New York provide Von Sternberg with his most beautiful canvas, and he delivers some of his most evocative work, his use of light and shadow no longer conveying the dichotomy between light and dark in men's souls but singing an eerie, wistful hymn to the forgotten men and women of the working class looking for their own slice of happiness in grungy places.

Taken together, these three films represent a stunning run of artistic successes for Von Sternberg, even if they represented increasingly diminished financial returns after the astronomical success of Underworld. Criterion's packaging of these early masterworks, much like their similar box set of Von Sternberg's later collaborations with Marlene Dietrich, is a veritable showcase for the filmmaker's work, his breathtaking ability to paint with light on full display on Blu-Ray, representing some of the finest work from one of cinema's greatest enfant terribles.


3 SILENT CLASSICS BY JOSEF VON STERNBERG is now available on Blu-Ray and DVD from The Criterion Collection.