Fueled mostly by gasoline and testosterone, James Mangold's Ford v Ferrari is the kind of film that will likely entertain legions of insomniac dads at 2:00 AM for years to come once it makes its basic cable debut. 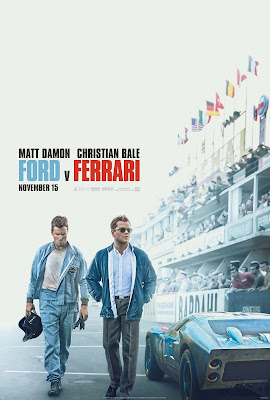 Set in 1966, Ford v Ferrari tells the true story Carroll Shelby (Matt Damon and Ken Miles (Christian Bale), a race car designer and a driver who helped the Ford Motor Company design the world's fastest race car in order to go head to head with reigning world champion Ferrari at the 1966 Le Mans in France. Yet despite Miles' hard work poured into creating the vehicle, Ford executives don't trust his brutally honest, unpredictable demeanor, and refuse to let him race the car he built, leading to tensions between the corporation and their racing team on their way to victory.

The biggest problem with the film is that it never gives us a good reason to care about any of this. The entire conflict was born out of an (accurate) insult Enzo Ferrari (Remo Girone) hurled at Henry Ford II (Tracy Letts) when Ford tried unsuccessfully to buy the Ferrari company, leading Ford to seek revenge by beating Ferrari at his own game. Shelby and Miles unwittingly become part of preening peacock fight and continue to seek glory for the Ford brand despite the corporate interference, mistrust, and outright hostility they encounter at every turn.

Mangold attempts to reframe the competition to be more about Shelby and Miles seeking personal glory in spite of the corporate pissing contest going on around them, but their decisions always end up returning to what is best for the Ford Motor Company even if the executive decisions seem counterintuitive to that goal. The bottom line is that everything here is a testament to corporate greed and fragile male egos - why are we as an audience supposed to care that some CEO got his feelings hurt and decided to try to win a race for revenge? Is it because Enzo Ferrari is Italian, and we're supposed to pull for the all-American Ford Motor Company out of some sort of patriotic fervor despite the fact that Henry Ford II is kind of a jerk and his workers are clearly being exploited to settle personal scores? Ford v Ferrari never explicitly descends into any sort of jingoism, but that's clearly the implication here. Ford is better than Ferrari because Ford is American. It doesn't matter that Ford's takeover offer was insulting to Ferrari, Ford is a by-god American and we're supposed to be on his side because he's a giant car manufacturer and has a wise-cracking driver played by Christian Bale.

The racing scenes are admittedly thrilling, often coming to life with a bracing energy, but without laying any sort of emotional groundwork there's nothing really at stake here. Who cares if Ford gets his win? Miles gives him what he wants and still gets screwed over, but Ford is still the good guy here? There's also only one woman in the entire film, and she's turned into such an insufferable nag at one point that she almost feels like a caricature. The whole movie seems built to stroke a very specific part of the male ego, where fragile masculinity can move mountains to settle a personal score but achieve nothing for the actual betterment of humanity. Ford v Ferrari is an old-fashioned Hollywood drama, sure, but it's old fashioned in all the wrong ways – it’s bloated, over-long, and celebrates the achievements of men only as they live to serve the capitalist machine, leaving anything resembling actual human drama in the dust.