There was a time when any sequel to one of Disney's animated hits would have gone directly to video with a different voice cast and less meticulously designed animation. But gone are the days of direct-to-video sequels like The Lion King 1 1/2, Lady and the Tramp II: Scamp's Adventure, or The Return of Jafar. With Disney increasingly focused on mining its established intellectual properties to keep nostalgic millennials returning to theaters to revisit their childhoods, it should come as no surprise that they should start capitalizing on their most popular animated properties with big screen sequels. 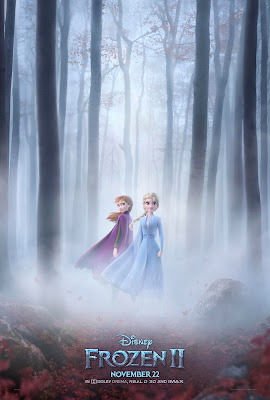 First up is Frozen II, a follow-up to 2014's unexpected mega-hit that turned Princess Anna and Queen Elsa into two of Disney's most profitable characters and "Let it Go" into a household tune. But this is no throwaway cash-grab sequel, writer/director Jennifer Lee actually takes the time to build the world of Arendelle while also tackling real world issues in a way that's both entertaining to children and palatable to adults. In short, Frozen II is Disney's best film of 2019.

The sequel picks up just after the events of the original film. Elsa is queen of Arendelle, Anna has recovered from her frozen heart, and Kristoff is unsuccessfully attempting to plan a way to propose to her. But Elsa is plagued by mysterious voices that seem to be calling her to a place far away, a place that may hold the answer to her icy powers. So she sets off with Anna, Kristoff, and her trusty snowman, Olaf, to discover the truth behind and an Arendellian legend, but along the way they may discover more than they bargained for - the fate of their parents, and the true and tragic history of Arendelle.

It's a much deeper story than the original Frozen, one that goes to some surprising and unexpectedly dark places. Frozen II is essentially a case for reparations and racial justice for indigenous people. And just in time for Thanksgiving! A lot of families will surely see this over the holidays, and while it may go over some heads this film brings some hard truths about reckoning with a national past built on racism and genocide.  It might actually be one of the boldest calls for social justice I’ve ever seen in a children’s film, and will certainly give families a lot of important ideas to discuss. The songs may not be as memorable as the original, often taking on a more Broadway-esque quality focused more on advancing the plot than sticking in the audience's heads, but Elsa's show-stopping "Show Yourself" number is an admittedly spectacular piece of animation, and Kristoff's "Lost in the Woods" hilariously apes 80s music video conventions like some sort of lost Michael Bolton tune.

You have to give Disney credit for taking this to a really dark place and emerging with a hopeful but unequivocal call to tear down the deeply engrained racist power structures that have held us up for so long. It acknowledges that real change is often painful but necessary, and doesn't let its characters off the hook for their complicity in propping up a deeply inequitable system. Elsa and Anna learn some hard truths about their family and the kingdom they love, but rather than lash out at those their nation has wronged and dismiss it as ancient history, they make change happen at all costs, even at their own expense. It's an important lesson to learn about history and our responsibility toward those whose peoples have been marginalized and ravaged by colonialism, and a surprising thematic core for an animated sequel to a Disney princess movie, but Lee handles it with surprising dignity and grace, even going so far as to sign a contract with indigenous leaders to respectfully portray their culture. It is the Thanksgiving movie we need, one that actually takes the time throw back the curtain on a sunny history written by colonialist victors, and offer a roadmap for national healing. One can only hope that the next generation is paying close attention.