In his follow-up to 2014's Palme d'Or winning Winter Sleep, Turkish filmmaker Nuri Bilge Ceylan turns his camera inward for a fascinating and  deeply introspective exploration of the very nature of art itself. 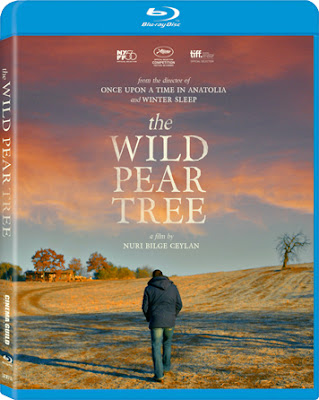 The Wild Pear Tree is ostensibly about a young man trying to differentiate himself from his deadbeat father, a man whose sometimes harebrained schemes and constant state of debt make him something of a laughing stock in their rural Turkish village. But beneath the surface it's about much more than that. Upon his return home from college, Sinan (Aydın Doğu Demirkol) is immediately met with requests from neighbors to remind his father to pay them back the money they borrowed from him. He soon learns his father has embarked on a quixotic quest to dig a well on top of a hill where the villagers insist there is no water. Embarrassed by his father's seeming incompetence, he sets off on his own potentially impossible dream of publishing a book, but meets with resistance and failure at every turn.

Ceylan crams a lot of soul searching into the film's 3+ hour running time. Sinan isn't always a likable protagonist - he's full of himself and the arrogance of youth, completely assured of his own brilliance and convinced that the world around him doesn't understand. His father is similarly self-possessed but approaches life with a greater sense of humility. It is up to Sinan to reconcile his own shortcomings with those of his father, while finding some semblance of wisdom in his father's tenacity. All the while he's grappling with the very idea of art and his own feelings of inadequacy. The question "am I really an artist?" has plagued the subconscious of many a creative person, and Sinan's growing suspicion that he may be an imposter fuels much of his arc in the film.

Like all of Ceylan's films, The Wild Pear Tree is often breathtaking in its beauty, featuring expansive wide shots and an overall sense that its characters are but small players in a much larger world, often moving through the frame in long, leisurely paced tracking shots, sight lines seemingly stretching off into infinity. Its sweeping cinematography and wide angle deep focus shots also serve to make its shallow focus close ups have all the more impact, as Ceylan frequently uses zooms to convey subtle shifts in mood and character emotion. Whereas Winter Sleep was awash in the muted tones of winter, The Wild Pear Tree employs much warmer tones, and Ceylan makes subtle use of lens flares - the blue light playing off the rich autumnal color palate.

It's often quite talky, any film this chock full of ideas and musings was bound to be, and it sometimes feels like Ceylan is really wrestling with some of these ideas himself, using the film to think out loud as a form of self reflection. Yet for all its philosophizing and intellectual banter, it's the sense of quiet that really lingers. The sound of wind rustling in the trees permeates the soundtrack, their gentle susurrus lulling us into a kind of meditative state appropriate for contemplating its myriad ideas. It’s big and wordy and a bit unwieldy, but it’s so full of artistic angst and insecurity in which an artist grapples with the meaning of art and whether or not he is fit to even be called an artist. It's a nervy, jittery, restless work from a filmmaker determined to never stop probing, reflecting, and seeking answers. Art is the ultimate act of nakedness, each new work opens oneself up to ridicule and heartbreak. It's that risk that provides the thorny center of The Wild Pear Tree - what if, after all that work, you turn out to have completely missed the mark? But no amount of greatness comes without risk, and by the time the film has reached its haunting final shot, it becomes achingly clear that art, be it film, or writing, or music, or even digging a well against all odds, will always be worth it if you persevere.