You'll be hard-pressed to find a film as sly, smart, and hilarious as Raúl Ruiz's dazzlingly experimental The Wandering Soap Opera. Ostensibly a send-up of Chilean telenovelas, the film offers a series of vignettes, made in the over-the-top style of South American soap operas, that savagely poke fun at Chilean society. 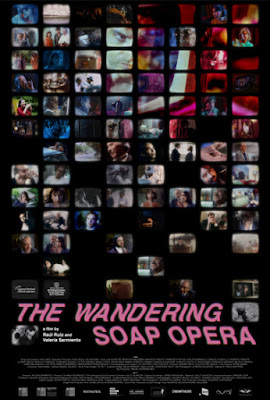 Ruiz, who passed away in 2011, shot the film in 1990, but left it uncompleted. His wife, Valeria Sarmiento, picked up the pieces and completed the film in 2017, five years after the release of Ruiz's final film, Night Across the Street, and its resurrection now makes for a fitting swan song for the legendary filmmaker's career. Ruiz began work on the film upon returning to Chile after a 15 year exile. Chile had undergone myriad reforms in the interim, leaving Ruiz feeling like a stranger in a strange land, an alien in his own country. It was a time when Chile was transitioning from dictatorship to democracy, opening up to the rest of the world in ways it had not before. Ruiz did not see all those reforms as a positive - the democratization of culture also meant a certain homogenization, hence the telenovela structure the filmmaker chose for The Wandering Soap Opera.

Each vignette is set within its own soap opera - a man attempts to seduce a woman with his muscles (that are literal pieces of meat), gangsters with political manifestos kill each other with increasingly self-aggrandizing feats of self-delusion, a group of women lose their husbands, while characters from other soap operas watch their exploits on screen, and strangers meet on the street while searching in vain for a place that must be around here somewhere. Meanwhile, the vignettes begin to bleed together, each person a character in someone else's soap opera, a cheesy melodrama played out on a national scale where reality is merely an abstraction.

Ruiz brilliantly manipulates our perception, exploring the relationship between cinema and the audience wherein we find ourselves watching and engaging with other people who are also watching and engaging with others on screen. The Wandering Soap Opera takes us down a fascinating rabbit hole of media consumption as it satirizes the vapidity of the culture that gave rise to them, as well as the world of lost souls they create. Just as Ruiz felt lost in 90s era Chile, so too are the characters in the film lost, trapped in a wandering soap opera they are at once aware of and yet completely oblivious to. Sure, they're in a soap opera, but it's the people in those other soap operas who are really lost, and around and around we go.

The Wandering Soap Opera may be finally arriving in North American theaters nearly 30 years after it was originally shot, but it feels as vital and timely as ever. It's the work of a master filmmaker interrogating his own art and his place in the society that made him. It's a radical, thrilling, and deeply funny satirization of mass media that boldly implicates the audience in the very culture that gave birth to it. Rarely is cinema so fearlessly and effortlessly manipulated into uncharted territory; even in death Ruiz is still boldly pushing it, and us, into the future.