As an undergrad theater student, one of the most fascinating playwriting exercises I was ever given involved sitting in a coffee shop, listening to the conversations of fellow patrons, and writing them down word-for-word as their own self-contained play. 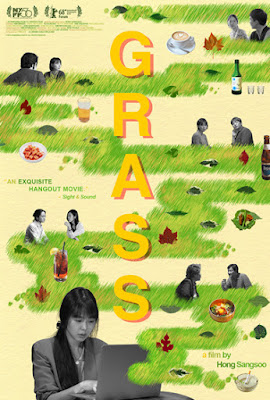 Hong Sang-soo's Grass is the very embodiment of that exercise come to life on film. Hong is known for his improvisational style of filmmaking, often writing scenes the morning they're to be filmed, giving actors minimal time to learn their lines and prepare. This often results in a kind of languid, stream-of-consciousness style, exploring characters and ideas through breezy conversations and observational bon-mots.

Grass centers around a writer named Areum (Hong regular, Kim Min-hee), who sits in a tiny cafe and observes the world around her. There's a couple awkwardly reuniting, a filmmaker trying to find a new place to live, two people grappling with a mutual friend's suicide. Areum catches snippets of their conversations, often attracting their curiosity. Is she writing about them? Is she ignoring them completely? Or, perhaps most intriguing of all, do the people exist at all?

What makes the film so wonderful is that Hong never directly asks these questions. He brings the disparate characters together and lets them play, but we constantly wonder if what we're actually seeing is what Areum is writing, or if it's actually happening. One could easily watch Grass and never pick up any of these cues, because on the surface it's simply a film about a woman sitting in a cafe while life happens around her. It does not appear to be about anything. But Hong films always seem to operate on multiple levels, there's the film we're watching, and then there's the film that's really happening beneath the surface. Hong is at his best when he's crafting elliptical narratives, playing with time, or even experimenting with reality itself. And yet his films are never flashy or outwardly experimental. They're multifaceted and beguiling, little unassuming emotional depth-charges that only reveal their wonders upon closer examination.

While Grass doesn't quite have the emotional weight of Hong's other 2019 film, Hotel by the River, but it reveals a fascinating window into the filmmaker's unique creative process. It takes snippets of overheard conversations and turns them into something wonderful and new, a summation of life's tiny moments made disarmingly momentous.