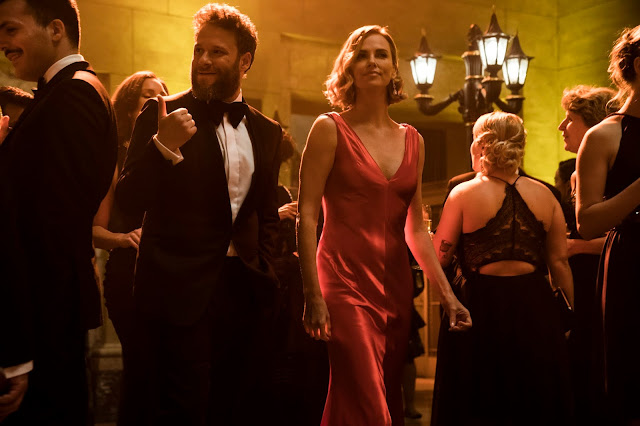 The romantic comedy genre seems to be undergoing something of a renaissance of late. From Love, Simon to Crazy Rich Asians, filmmakers are finding ways to play within the established rules of the genre while making it wholly their own. 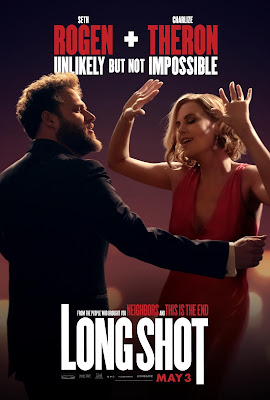 Jonathan Levine's Long Shot may not break any new ground, but its smart script (by Dan Sterling and The Post scribe Liz Hannah) makes its romantic comedy tropes feel somehow fresh. We've all seen movies where a shlubby guy ends up with a woman way out of his league. Putting aside for a moment the vaguely sexist overtones of this cliche (you rarely, if ever, see the opposite occurring in film), Long Shot feels so genuine and so cleverly written that the lack of originality in its structure takes a back seat to the witty dialogue and winning performances.

Seth Rogen stars as Fred Flarsky, a guerrilla journalist who reconnects with his former babysitter, Charlotte Field (Charlize Theron), now a successful Secretary of State eyeing a run for President. After reuniting at a Washington fundraiser, Field hires Flarsky to boost her speeches with some of his trademark humor, but the two hit it off and are forced to hide their relationship from the press in order to keep her favorability ratings high, or face losing her dream of becoming the first female president.

It's all fairly standard fare, but achieved with a rare sense of narrative grace. Rogen and Theron are great fun, ditto Andy Serkis, who is nearly unrecognizable as a sleazy, Rupert Murdoch-esque media tycoon. The film manages to explore the idea of the negative influence of money in politics, and how compromise often leads to policies that do no one any good other than to play lip service to real progress. It does dabble in some milquetoast "why can't we all just get along" centrism by the end, which seems to undercut its core message about the detriments of trying to please everyone, only to please no one, but the way it manages to zero in on the corrupting influence of corporate interest in our politics in a comedic way is to be commended.

It's also a grand return to the kind of R-rated comedy of There’s Something About Mary, American Pie, The 40-Year-Old Virgin, and Superbad, in that it doesn't feel aimed at the lowest common denominator. It's a kind of grown-up romantic comedy that doesn't feel like it's pandering to a teen audience, set amongst a modern political landscape that still manages to feel like an escape from our current farcical system without avoiding actual issues. It may feel overly familiar, but Rogen and Theron are such a constant delight, and the screenplay such a winning combination of humor and heart, that it manages to subvert its own clichés even while resting comfortably among them.