The third entry in the popular John Wick series, John Wick: Chapter 3 - Parabellum picks up immediately where John Wick: Chapter 2 left off, with the eponymous assassin (Keanu Reeves) being labeled "excommunicado" by the criminal organization where he once worked for killing a man on the grounds of their sanctuary hotel, The Continental.  With one hour to go before becoming the most hunted man in the world, John Wick sets out to find the man in charge of the High Table in order to clear his name and save his own life. But with nearly every assassin in the world hot on his trail, that's a task easier said than done. 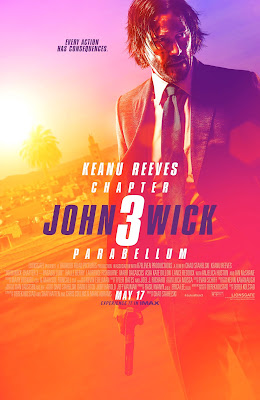 It's important to remember that all three of these films take place back to back to back, essentially making John Wick the world's more tired killing machine. Director Chad Stahelski manages to ratchet up both the action and the stakes while reminding us of Wick's growing weariness. The fight sequences are more bruising, more protracted, and more brutal, with Wick resorting to more and more creative methods with which to dispatch his enemies. The beautifully choreographed action sequences have always been one of the biggest selling points of these films, and Stahelski outdoes himself here. The violence of John Wick 3 has consequences; the audience feels every punch and every shot. Wick may be an unstoppable angel of death, but that doesn't mean his job is easy.

Perhaps even more so than its predecessors, John Wick 3 is clearly influenced by Hong Kong action cinema, with its blazing mix of hand-to-hand combat and gunplay. Shot in bright, contrasting neons, the film often feels like a cross between the work of Johnnie To and Nicholas Winding Refn, endlessly action-packed and yet somehow light on its feet - a gloriously over-the-top symphony of violence featuring some of the most dazzling action sequences in recent memory.

Yet perhaps the most impressive aspect of the John Wick films is their world-building. Stahelski has created a hyperrealistic world of honor among criminals, where the underworld has risen and the rules of the real world no longer apply. The mythology of the High Table and the endless rules by which its adherents must abide have been gradually revealed over the course of the three films, which began as a simple tale of revenge about a man avenging the death of his dog, and has now expanded to an operatic tale of a brilliant assassin taking on an entire system of criminals as a result. It's a fascinating world, and Stahelski has crafted it beautifully, showcasing a wildly creative and intricately plotted system of petty murderers and minor kings, all playing a part in a grand, overarching network of crime.

The film ends with a setup for yet another film in the series, so don't come to Parabellum expecting closure. But its promise of a fourth film actually feels earned - there's more world here to explore, and Stahelski leaves us wanting more. The John Wick films make up a rare series that just keeps getting better, with a righteous anti-hero at its center who remains compelling not just because he will stop at nothing to get his man, but because all he wants is to be left in peace with his dog, but keeps getting dragged back into work. Who among us can't identify with that?