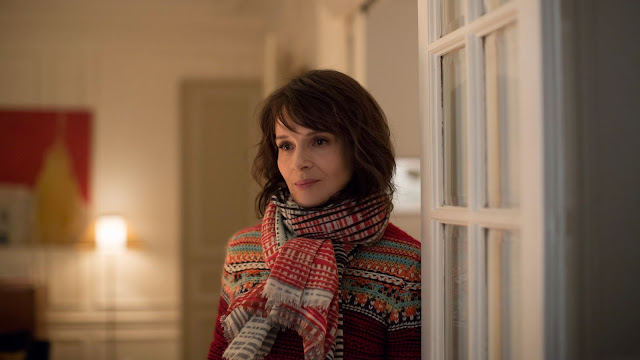 They say the internet is forever, but there's something about the ephemeral nature of social media that makes films about modern technology feel instantly dated. Enter Olivier Assayas, the latest auteur to try and tackle the deeper questions of modern technology. 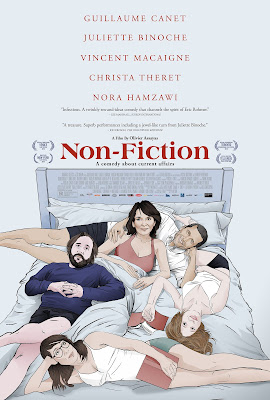 Non-Fiction is essentially a series of talky, philosophical musings about our intangible digital world, a sexier My Dinner with Andre set in the world of modern-day publishing. The film centers around 5 characters - Alain (Guillaume Canet) a publisher struggling to maintain the relevance of physical books in the face of rising e-book sales (reportedly, the film's English title was almost E-BOOK); his wife, Selena (Juliette Binoche), star of a potboiler police procedural TV show; his longtime friend, Léonard (Vincent Macaigne), an author who often gets in trouble for making his real-life inspirations a bit too obvious (including a brief affair with Selena), and his wife, Válerie (Nora Hamzawi), who is having an affair with Alain.

As the group swap beds and complaints about the state of the world and the publishing industry, Assayas begins to parse a series of theses about life in a world that cannot be touched, where human connections are fleeting and transitory, lived through a screen rather than face-to-face. The filmmaker mounted similar investigations of communication in Personal Shopper (2017) and theatre in Clouds of Sils Maria (2014), yet something seems to be missing from Non-Fiction that made those films so enthralling.  The heart of Non-Fiction seems to be a luddite rant about "kids these days and their cell-phones and e-readers" rather than a studied meditation on human experience. Assayas seems to be throwing his hands up in exasperation at every turn, decrying the progress of technology while longing for the feel of a real book in his hands.

There's nothing inherently wrong with that, of course (I, too, prefer physical books to e-readers), and the filmmaker often seems to be in dialogue with himself about that very inner conflict. But his self-referencing (Juliette Binoche gets name-checked as a potential audio book narrator) and his prodding of Michel Haneke through a running joke about The White Ribbon feel like odd attempts at meta-humor that never quite congeal. While its never quite as didactic as Haneke's Happy End, a similar critique of modern technology, Non-Fiction feels as oddly temporal as the very ideas it seeks to explore. There are some fascinating ideas at play here, but Assayas handles them with a kind of smugness that is more off-putting than involving. There's a strange sense of condescension in his musings that keeps us at arm's length, never allowing its exploration of modern technology to really bloom. It's an unusually uninvolving detour for the historically erudite director, seemingly stuck too doggedly in the past to really explore the ideas that will shape our future.