Very little is known about the last days of William Shakespeare, who died in 1616 at the age of 52. The manner and circumstances of his death remain something of a mystery, leaving historians to fill in massive gaps using minimal evidence. What is known is that is that after the Globe Theater burned during a performance of Shakespeare's final play, Henry VIII (a collaboration with John Fletcher), the playwright never wrote again. 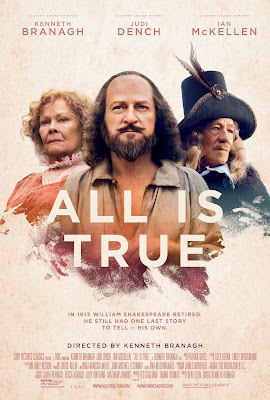 Kenneth Branagh has always shown an affinity for Shakespeare's plays, having directed cinematic adaptations of Henry V, Hamlet, Much Ado About Nothing, Love's Labour's Lost, and As You Like It, so it seems only natural for him to step into the role of the bard himself in his latest film, All is True.  Set in the last years of Shakespeare's life, All is True (which shares its name with the alternate title of Henry VIII  portrays the playwright as a broken man, a distant father returning to Stratford-upon-Avon to mourn the death of his young son, Hamnet, who died years earlier while Shakespeare was away in London.

This is not the winsome, happy-go-lucky Shakespeare of SHAKESPEARE IN LOVE. The film explores the idea of the world's greatest playwright, one of the finest investigators of human emotion who ever lived, being completely unable to apply that genius to his own personal life. He has all but neglected his family. His wife is distant, his daughters resent him, and Shakespeare, the man who gave us some of English literature's most enduring love stories in Romeo & Juliet, Twelfth Night, and A Midsummer Night's Dream is unable to connect with the very people who are closest to him.

All is, of course, not true. The title in and of itself is something of an intentional misnomer, as Branagh is essentially creating Shakespeare fan fiction here. But as the playwright explains, all is true that comes from the heart, and that is perhaps the film's greatest asset - it comes directly from Branagh's heart. It's a strangely shapeless narrative, loosely centered around Shakespeare's mourning for his son while trying to preserve his family's standing by clearing up scandals involving his daughters. All is True is, at its heart, a character study, but it often seems to meander - rushing from one scene to the next with a pace that is often at odds with its elegiac tone.

But when Branagh finally stops trying to connect seemingly unrelated dots and lets his characters speak, All is True really soars. Branagh's scene with Earl of Southampton, Henry Wriothesley (Ian McKellan), here portrayed as the unrequited object of Shakespeare's affection from his sonnets, is pure poetry, and his scenes with his wife, Anne Hathaway (Judi Dench), are likewise imbued with a kind of quiet fire. Watching these great actors tackle these characters is a privilege, and Branagh's work as Shakespeare is one of his finest performances.

The whole affair has a kind of autumnal beauty, reflecting on a life that, no matter how well lived, is still filled with regrets; T's left uncrossed, I's left un-dotted. It's a lovely chamber drama born out of a real passion for its subject, and that while that passion may seem oddly muted and underplayed, Branagh's uncharacteristic restraint, even amid such gorgeous production design and vibrant cinematography, displays a disarming maturity of craft. Even when it threatens to traffic in contrived family drama with its final revelations, Branagh's focus on the actors and their performances keep All is True from becoming a melodrama. It's uneven, to be sure, but it's hard not to be swept up in Branagh's hauntingly reflective vision of a lion in winter; a great man now removed from the work that made him a legend, trying desperately to learn the emotional lessons he once wrote about so eloquently, but never got the chance to put into practice.