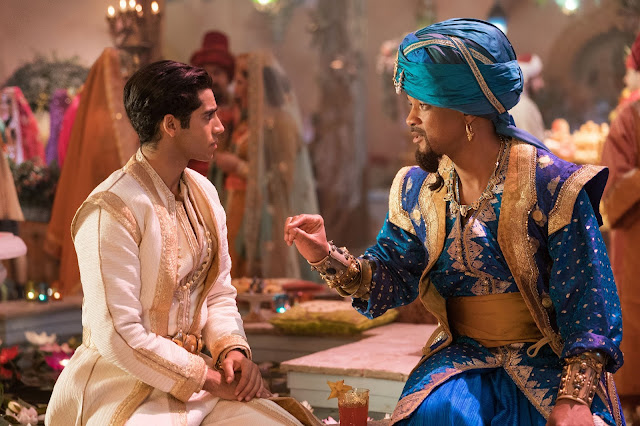 Disney's new trend of remaking its animated classics as live-action features continues unabated with Guy Ritchie's Aladdin, a remake of the 1992 musical directed by Ron Clements and John Musker. The original film was defined mainly by Robin Williams' now iconic performance as the Genie, a mystical blue being summoned from a magic lamp by "street rat" Aladdin. 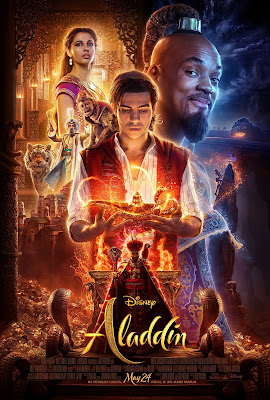 Stepping into Williams' considerable shoes is Will Smith; not a bad choice on paper, but Smith seems consistently trapped in Williams' shadow, seemingly unable to define the character as his own. He stumbles when trying to recreate Williams' manic improvisations, only managing to distinguish himself when he makes the character his own - we'll call him "Hitch in a bottle." His attempts to make-over Aladdin from a common thief to a prince are the highlights of a film that is sadly bereft of them. In fact (and this should come as a surprise to no one), the entire film is seemingly devoid of imagination - it's a bland, lifeless remake with no personality of its own, hitting all the notes of the original film while adding a few new flourishes to make it more in tune with 2019 audiences.

The Disney live-action remakes have been something of a mixed bag, ranging from great (Pete's Dragon) to good (Cinderella, The Jungle Book) to abysmal (Alice in Wonderland). While most have fallen in that middle range, Aladdin is near the bottom of the pile. The faux-Bollywood musical numbers are strangely flat and cheap-looking, like a community theatre production of "Aladdin Jr." You'd find a greater sense of wonder and awe in a performance of the same material at Walt Disney World, and therein lies perhaps its greatest problem - Aladdin is little more than the latest piece of corporate synergy released in theaters to make tons of cash off millennial nostalgia without bringing anything new to the table. It's like they're not even trying - director Guy Ritchie is all wrong for this material, but even he seems strangely neutered, his trademark style completely obliterated by the milquetoast design and uninspired cinematography.

What's the point? Why did it need to be a musical at all? If you're going to remake this story, bring something new to the table. The musical numbers feel unnatural, and the film's new song, "Speechless" (written by The Greatest Showman's Benj Pasek and Justin Paul), is an insipid anthem for Jasmine that feels shoe-horned in from a different show entirely. Turning Princess Jasmine into a stronger character and the next natural Sultan of Agrabah is an appealing idea, making her a more modern role model for young girls, but "Speechless" is a cringe-worthy song, and completely undermines what the film is trying to do with her character by turning a major character moment into pure cheese.

Add "Shameless" to a variety of off-tempo covers of the songs from the original film, and you have a bizarrely lack-luster, dully designed big budget extravaganza that feels tired and stale. Rarely has so much money gone toward creating something so drab and unimaginative. It's not the worst of Disney's live-action remakes, but it's certainly one of the laziest; a bloated cash-cow that is as tedious as it is ponderous.