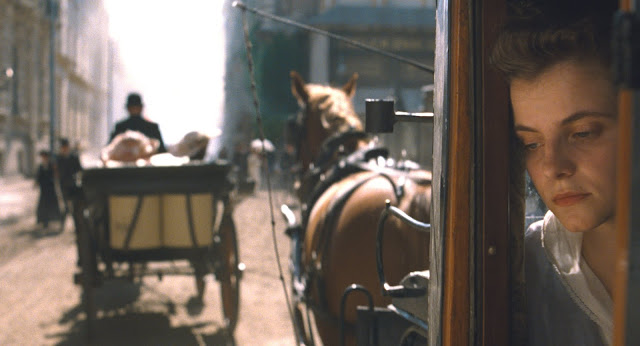 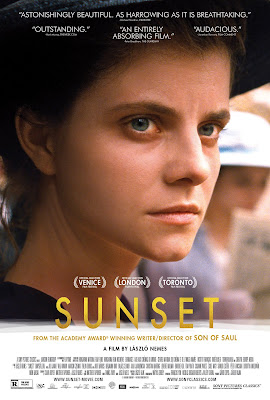 Yet despite its sterling reputation, “Son of Saul” was a film I found to be cold and distancing, enamored with its own particular stylistic affectations. Nemes doubles down on these affectations in his new film, Sunset, holding his protagonist tightly in frame, forcing the action happening around her to occur in the periphery. This time, however, the technique works on a more fundamental level, seemingly less self-conscious and more thematically justified.

The protagonist in question is Írisz Leiter (Juli Jakab), an orphaned heiress to a successful Budapest hat company, who returns to her home to work at the shop and reclaim her birthright in the days before World War I. She gets more than she bargained for, however, when the new owners of Leiter's turn her away, and she begins to uncover dark secrets about her family and the business they created.

"The horror of the world hides behind these infinitely pretty things" a man tells Írisz while examining the Leiter hats, and indeed the cracks in the facade of Austria-Hungary's upper crust are beginning to show in Sunset. Acts of terror rock the country, everyone is on edge, and the projected gentility of the nation's ruling class is beginning to fall away. Society is rotten to the core, and Írisz soon finds herself lost in a world that is coming apart at the seams. By keeping the camera focused tightly on her, Írisz becomes something of an avatar for the audience, her inscrutable face a mask onto which viewers can project themselves. The camera is constantly in motion, the whole film seemingly in flux, as it follows Írisz through the streets of Budapest, uncovering snippets of sinister rumors and witnessing ever increasing acts of violence that betray a crumbling society.

Nemes' craft feels far more assured here than it did in Son of Saul. Írisz is a kind of vessel through which the audience witnesses society eating itself from within. It's a similar idea to those put forth in Son of Saul, but here it feels less frustrating self-satisfied and more haunting and unsettling. Shot in golden-hued tones with sumptuous period detail, Sunset feels like a Merchant-Ivory production slowly dissolving before our eyes, the warm cinematography eventually fading into washed out grays and muted colors. It's a disturbing portrait of a world slowly going mad, where the privileged prey on the weak and look the other way as the world disintegrates around them. In that regard, it's less about the socio-political climate of pre-war Austria-Hungary and more about the world in which we live now, a world standing on the brink of catastrophe, careening toward the precipice while disguising the intrinsic rot with shiny baubles to distract from the coming devastation. Sunset plays its cards close to the vest, never quite revealing the true nature of the darkness at its core, yet it’s that very sense of mystery that makes it so universally unsettling. This is a society seemingly hellbent on ushering in its own destruction - we would do well to sit up and listen.