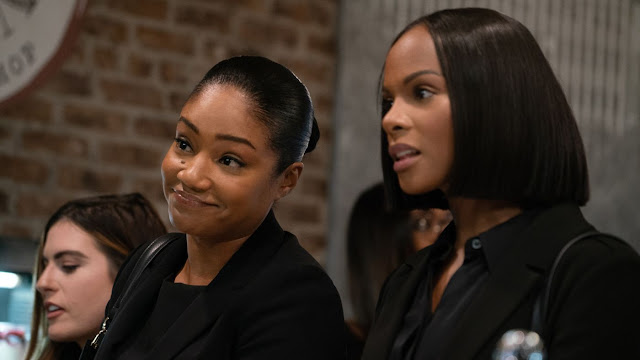 It can be tough to be a Tyler Perry apologist in the face of films like Nobody's Fool. To be fair, nothing about Nobody's Fool feels like a Perry film - it feels like a substandard director-for-hire project that somehow ended up with Perry behind the camera. That's not the case here, unfortunately, Nobody's Fool is Perry's through and through; but it is completely devoid of the personality and charm that are often present even in Perry's most pedestrian works. 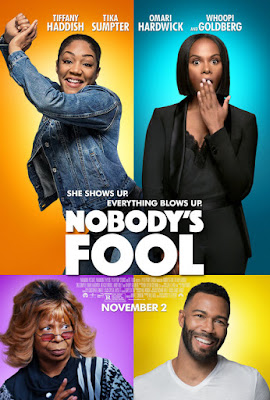 Billed as a star-vehicle for Tiffany Haddish, a hot-commodity following her star-making performance in Girls' Trip, Nobody's Fool instead wastes Haddish in a supporting role and turns the focus on her sister, Danica (Tika Sumpter), an uptight marketing executive who is dating a man she has never met. After Danica picks her foul-mouthed, over-sexed sister, Tanya (Haddish), up from jail, Tanya immediately sets out to find out the real identity of Danica's mysterious boyfriend to find out if Danica is in fact being "catfished." All the while, her perfect man may be staring her in the face, a handsome barista named Frank (Omari Hardwick) who greets her with coffee and a rose every morning and his coffee shop.

The problem here is that it doesn't seem like Perry can make up is mind as to what he wants Nobody's Fool to be. The catfishing plot-line is quickly dropped, segueing into a romantic comedy in which the stuck-up Danica can't get over her hang-ups about Frank's criminal past. Then, just when it appears to be coming to a close, it hits us with a totally unnecessary third act twist that not only derails the plot, it destroys any remaining sympathy we may have had for Danica. It's a clear attempt by Perry to subvert romantic comedy tropes in which a man gets to make mistake after mistake, only to be forgiven and taken back by the woman. But Danica is just too flawed and too arrogant to root for. She's the kind of character that would normally be a villain in Perry's films, yet here she is as a romantic lead that's impossible to root for or care about.

The film is saved from complete oblivion by Haddish, but Perry's improvisational directorial style doesn't do her a lot of favors, giving her ample room to play, but her anarchic presence is often more than the film can handle. It's also got quite a bit more language and graphic sex than the typical Perry joint, which isn't in and of itself a problem, but it feels incongruous with Perry's style. It's as if he's trying to break out of the faith-based comedy mold that made him famous into something more edgy (see also his other 2018 film, Acrimony, where it felt more natural), but it just doesn't fit the film, coming across as a naked attempt to be more mainstream rather than serve the film. It may not feature some of the same instances of sloppy directing present in his last two films, Acrimony and Boo 2, but it's much more of a narrative mess - devoid of Perry's usual affable charm or melodramatic flair; and no amount of Haddish's spirited comedic patter can save it from itself.