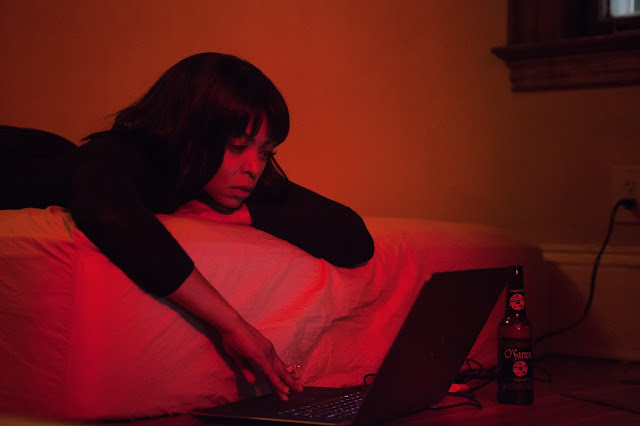 Tyler Perry's Acrimony is a rare foray into R-rated territory for the filmmaker. Outside 2010's R-rated For Colored Girls, Perry tends to hew closer to PG-13 rated fare, throwing in just enough salty language for effect without alienating his often faith-based audience.

In Acrimony, he delves into the deep-end of the newfound freedom brought on by the R-rating, tackling the story of a wronged woman in ways that display considerable artistic growth for the filmmaker. I know I'm one of the few critics out there who has been banging the drum for Perry all along, but I'll stand by my assertion that he is one of the most distinctive auteurs working today. Acrimony is both a step forward and a step backward for Perry, as he works to subvert his own formula while indulging in some of his worst directorial habits. 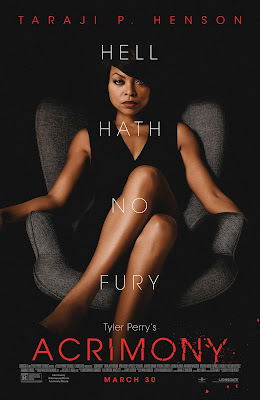 The best thing about the film is easily Taraji P. Henson's delightfully deranged performance. As Melinda, a woman dealing with the perceived betrayal by the man she loves, Henson is a marvel of slowly boiling rage, like a kettle coming to a boil over the course of two hours. There is a moment near the beginning of the film that is perhaps one of the most stunning shots of Perry's career; a chilling long-take with a slowly unraveling Henson at its center against the backdrop of a foggy Atlanta sky.  Perry's last few films featured some really sloppy filmmaking, but this shot displays a jaw-dropping level of control anchored by a tremendous performance.

At first we think we're watching yet another Perry film about an abusive husband and his long-suffering wife. Melinda's husband, Robert (Lyriq Bent) is a bit of a lout. She catches him cheating before they're even married, and he spends years of his life on a quixotic quest to build a self-recharging battery, throwing away all their money, while Melinda toils away to support him. But slowly we begin to realize that, while Robert is far from perfect, he might have not been such a bad guy after all, and that Melinda's suspicions and mistrust may be coming from within.

It's fun to watch Perry subverting his own formula, and the resulting fireworks display of drama makes for some delicious pulp. But Perry also tends to get in his own way, overlooking so many minor details and mistakes that it hurts the overall product. The film was reportedly shot in just over a week, and it shows. A woman emerges from the ocean with bone dry hair. A delivery truck for the family business clearly has a temporary logo pasted over the real one. A couple walking beside a river are clearly standing in front of a poorly rendered green screen. I'm not sure if Perry doesn't notice these things, or if he thinks no one else will, but along with the awkward dubbing in Boo 2, these are some of the most blatant oversights of Perry's career.

The movie is fun regardless. It's a gloriously seedy soap opera and Henson devours the scenery with great relish. But it's a shame to see the details of Perry's narrative get so unceremoniously swept aside. The devil  is often in the details, and in Acrimony, Perry doesn't seem particularly concerned with the craft of his film, which is disappointing because he is so clearly capable of better. He's a filmmaker who continually shows great promise, not to mention a keen understanding of his audience and his own particular storytelling language, but the breakneck speed at which he works tends to leave little time to really shape his films into something truly special.