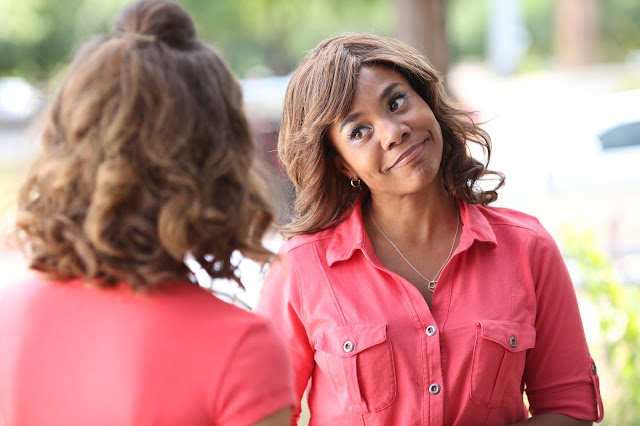 “For mothers” reads the post-script of Andrew Bujalski's Support the Girls, a wise, wonderful, and altogether marvelous film about the long-suffering manager of a knock-off Hooters sports bar dealing with the seemingly never-ending crises of middle management.

Stuck between an absentee owner who has no idea what actually goes on in his business, much less any real connection to his employees, and a working class staff unable to leave their daily problems at the door, Lisa (a luminous Regina Hall) displays both the patience of Job and the steely determination of a working class queen. 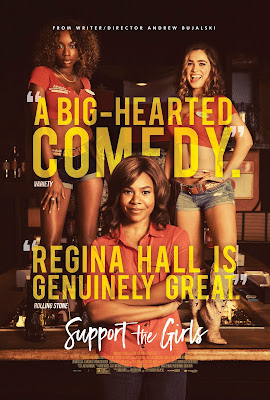 Kind, big-hearted almost to a fault, yet completely understanding of the world around her and her place in it, Lisa faces each of the day's problems with a smile, dealing with with everything from employee theft to owner incompetence, to a cable failure before a big fight, to unruly customers, all while trying to make the next week's schedule and host an off-the-books benefit car wash for one of the waitresses.

“All I wanted to do today was one good thing," she sighs at the end of yet another long day in which seemingly nothing went right. Yet it is her calm, nurturing presence that that keeps the ship from capsizing in the midst of myriad storms. Lisa may not be a mother, but as the film's dedication suggests, her penchant for barely holding it together for the sake of others while putting out fire after fire is a testament to the strength of mothers and working class women everywhere for whom just getting through the day is a daily struggle. Support the Girls exists at an intersection of race, gender, and class, each character working paycheck to paycheck in exhausting, thankless jobs that society at large would consider "unskilled" for minimum pay. Yet Bujalski displays a keen understanding that it is these very service industry workers who are perhaps the most overworked and underpaid. Lisa, so dedicated to her job that she stops to ask a customer how his meal was even after quitting, represents a thoroughly modern working woman who doesn't take shit off of anyone while trying to keep food on the table and the world around her from falling apart.

For Bujalski, whose trademark brand of improvisational realism first brought the term "mumblecore" into the popular lexicon with films like Beeswax and Computer Chess, Support the Girls is perhaps his most formal work yet. But never once does he sacrifice verisimilitude for structural precision. Support the Girls is a warm, funny, sublimely entertaining film, anchored by a soulful performance by Regina Hall, whose smiling face barely hides the weariness underneath. She deserves all the awards buzz that she will never get for a film of this scale, but it's a performance for the ages that cannot be praised enough. It's one of the understated wonders of the year in film, a small-scale miracle that peels back the smiling, attractive facade of the American service industry and reveals the blood, sweat, and tears that keep the fantasy going.