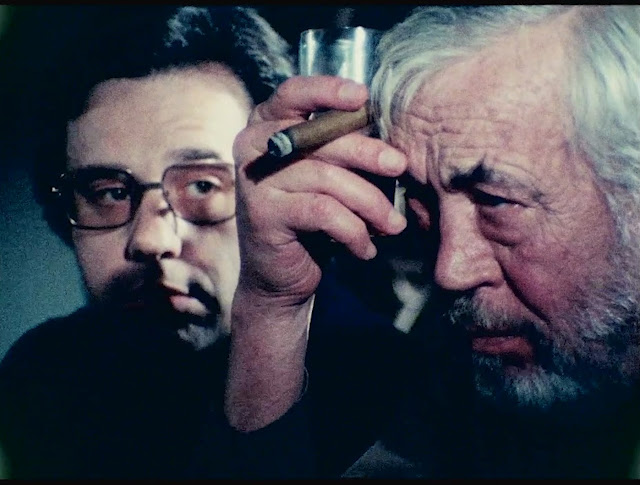 A cinematic event 40 years in the making, The Other Side of the Wind is the long-lost final film by legendary filmmaker Orson Welles. Having spent nearly two decades in Europe, Welles returned to the United States in 1970 to begin production on a project that would not be completed in his lifetime. He spent most of the 1970s working on The Other Side of the Wind, completing principal photography in 1976 and editing it into the 1980s. Welles died in 1985, leaving the film unfinished, seemingly destined for the dustbin of history. 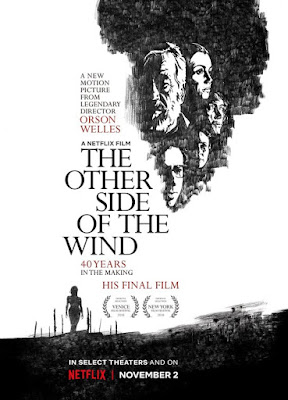 That is until the rights were acquired by Netflix, with filmmaker Peter Bogdanovich (who also starred in the film) finishing what Welles started, making its triumphant screen debut at long last in 2018, premiering at the Venice Film Festival before being released on Netflix's streaming platform.  It may seem something of an inauspicious end for the fabled final film of the man who directed Citizen Kane, yet the very existence of the film is something of a miracle. Here we are in 2018 watching a brand new Orson Welles film, and the results are nothing short of electrifying.

Mirroring Welles' own experiences in faux-documentary style, The Other Side of the Wind is the chronicle of renowned filmmaker Jake Hannaford (played by similarly renowned filmmaker John Huston) who returns to the United States from European exile in order to make what would become his final film. Welles follows Hannaford on the final day of his life, examining the troubled production of his film, The Other Side of the Wind, an experimental piece filled with gratuitous sex and nudity  meant to attract investors to help him complete it. This film-within-a-film becomes the crux of Welles' blistering critique of Hollywood and the industry that had spurned him. Hannaford travels from screening room to screening room, followed by sycophants, journalists, and hangers-on, each time met with screening difficulties that shut the film down. Eventually there is no audience left at all, and Hannaford is left to die alone, his film all but forgotten.

It's an eerie mirroring of Welles' own experience in making the film, although he vehemently denied such parallels, claiming instead that Hannaford was based on novelist Ernest Hemmingway, along with other storied "macho" filmmakers such as John Ford, Raoul Walsh and William A. Wellman. Regardless of its inspirations, The Other Side of the Wind is a thorny, troubled, angry, work of radical cinema the likes of which are rarely seen. It is at once a work of painful self-reflection and bold defiance, a giant middle finger to an industry that had turned its back on Welles. This is Welles both gazing at himself as at outsider and looking deep within himself as a filmmaker in twilight - a lion in winter and one-time wunderkind who made what many consider the greatest film of all time at the age of 24, and spent the rest of his career refusing to be but into a box.

“Every man contains within himself the whole condition of humanity," whispers one woman about Hannaford at one point, a line that seemingly lays bare Welles' almost limitless ambition in his twilight years. Here, a man who started his career making avant-garde silent shorts and radio dramas creates one of the most brazenly modern films of his career, a work of experimental cinema that takes stock of the industry as Welles saw it - from the New Hollywood Cinema of Scorsese, De Palma, and Coppola, to the European art house cinema of Michelangelo Antonioni (mercilessly lampooned in Hannaford's film-within-a-film). This is cinema as voyeurism, for both the filmmaker and the audience. Is cinema a means to an end or simply an end? A journey or a destination? A penetrative act or a reflective act? Here, Welles dismantles the male gaze, the camera as a phallus, positioning cinema as an act of rape that destroys that which it seeks to exalt. It is a daring, reckless, uncompromising film that has risen like a phoenix from the ashes to take its place in the pantheon of great things - the final film of an American master who, 33 years after his death, has shown the world that he is just as vital and brilliant as ever. The Other Side of the Wind is a masterpiece.