Famously cut down in his prime at the age of 31 in 1926, silent movie star Rudolph Valentino was at the time arguably the most famous face in Hollywood. Valentino may not enjoy the same reputation as contemporaries Charlie Chaplin, Buster Keaton, or Mary Pickford today, but at the time of his death he was a major star whose beauty in films like The Sheik lit up screens and hearts in equal measure.

Perhaps Valentino is less remembered today because of the quality of his films. While Chaplin and Keaton made their masterpieces, and Pickford displayed a remarkable eye for talent and quality projects, Valentino was not so lucky in that regard. Valentino's undeniable beauty and piercing eyes are what made him a star, while his films were the 1920s equivalent of modern day blockbusters. Audiences flocked to see Valentino, but his films were often forgettable melodramas that haven't endured in cinema history the way he has. 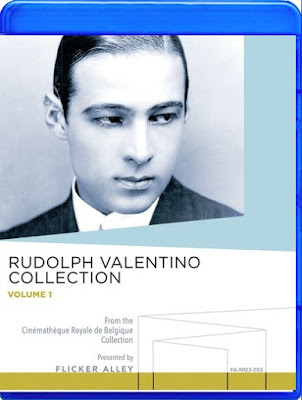 While his most famous roles were in The Sheik (1921), its sequel Son of the Sheik (1926), and Blood & Sand (1922), Valentino started playing smaller roles much earlier, working his way up through the ranks to starring roles. Flicker Alley has collected many of these films into their new two-volume Rudolph Valentino Collection, which is an invaluable chronicle of the rise of a superstar.

Volume 1 contains two longer films that were early starring vehicles for the young star - Eyes of Youth (1919) and Moran of the Lady Letty (1922). In Eyes of Youth, a woman faced with the choice between two men, one a wealth playboy, the other her true love, is given the opportunity to look into the future to see where her decisions will ultimately lead in this melodrama, featuring Valentino in a supporting role.

Eyes of Youth is very much the kind of overripe soap opera that was popular in its day, but it was also surprisingly progressive in its view of sexual politics and the way women's lives were affected by the decisions of powerful men. Valentino's role is brief, but his smolder is unmistakable, and director Albert Parker (best known for the silent Douglas Fairbanks adventure, The Black Pirate) has a strong visual sense, resulting in some lovely cinematography by Arthur Edeson (Casablanca, Frankenstein).

Released a year after the success of The Sheik, Moran of the Lady Letty finds Valentino in full-on star mode, sending him off on the high seas took off on the high seas as a wealthy heir who gets shanghaied by a band of smugglers, where he meets a beautiful sailor's daughter who has lost her ship. Some leaps in logic and time can be accounted for by missing pieces of the film, but Moran of the Lady Letty is a handsome production, beautifully restored for the new Flicker Alley Blu-Ray edition. Valentino shines in one of his earliest leading roles, and the spirit of adventure on display here would serve him well later in his short career. 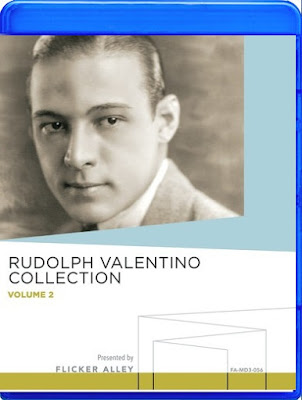 Volume 2 of the collection contains more supporting roles and bit parts showcasing Valentino's path to fame. He appears as a romantic interest in 1918's A Society Sensation, which was truncated to 2 reels from a longer version after he became a hot commodity a few years after its release. A wealthy young man falls in love with the daughter of a fisherman, who may or may not be a long-lost duchess in this 1918 short film. The longer version has been long since lost, and this shortened cut excises a lot of the plot development to focus on Valentino rather than Carmel Myers' lead.

The surviving cut isn't particularly good. Valentino is an attractive lead and its easy to see why he became a star, but A Society Sensation is a cheaply produced melodrama at heart, diced to pieces as a cheap cash-in on a newly bankable star making it little more than a charming curio at this point.

1919's Virtuous Sinners is an obscure film in which Valentino only had a small, supporting role. An abused housewife is cast out by her husband, only to fall in love a with a criminal who she comes to love and support after he robs a bank to pay for an injured child's medical bills. Valentino plays a member of the man's gang, but the film is something of a truncated trifle that falls into the all-too-common silent trap of sermonizing its message with blunt force.

Standing on the precipice of stardom, Valentino appeared in a rare villainous role in James Vincent's Stolen Moments (1920), a romantic drama about a young woman (Marguerite Namara) in the deep south caught between an upstanding young man (Albert L. Barrett) and a latin lothario (Valentino).

A mostly dull, listless melodrama, the film was reduced from 5 reels to 2 after Valentino became a mega-star in the wake of The Sheik to focus more on his sleazy character, resulting in a stilted work that puts unnecessary focus on a secondary character, neutering its narrative drive. The only surviving elements of the film showcase some sophisticated editing, but its overall structure is so off-kilter that it just doesn't work. Interesting only as a piece of the Valentino puzzle, showcasing an actor about to enter the stratosphere. Volume 2 of the collection also includes The Young Rajah, a "lost" Valentino film made on the heels of The Sheik, quickly capitalizing on the young superstar's new found "exotic" persona.

While none of them are great films, they nevertheless offer a window into one of Hollywood's most indelible and inscrutable stars, a towering figure in film history who nevertheless remains something of a mystery to many. Like an early James Dean, Valentino was gone way too soon, a star that shone brightly before being snuffed out just as quickly. In Flicker Alley's new MOD Blu-Ray Valentino shines once again, making it a must-have set for enthusiasts of silent film.

The Rudolph Valentino Collection Volumes 1 and 2 are now available from Flicker Alley.