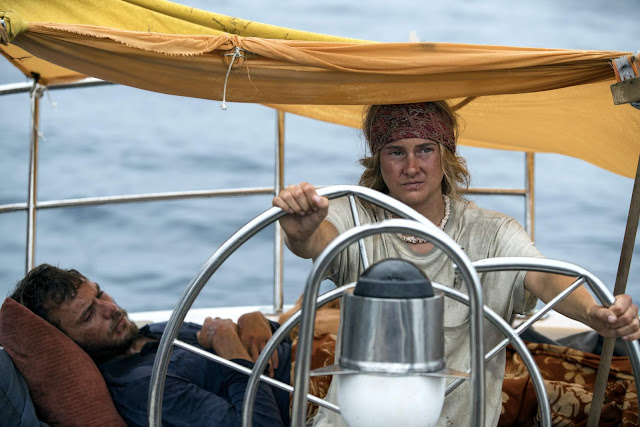 You're lost in the middle of the Pacific Ocean on a drifting derelict boat. There's no land for thousands of miles. Your food is running low, your radio is broken, and you have no way to call for help. This is no Hollywood fantasy, this is exactly what happened to Tami Oldham and Richard Sharp on a voyage from Tahiti to California in 1983, after their boat was seriously damaged by Hurricane Raymond.

It's a compelling tale of survival against impossible odds, but you wouldn't know that necessarily from watching Baltasar Kormákur's new film, Adrift, which seems intent on undercutting any natural tension its story might have. Shailene Woodley stars as Oldham, a young woman in her early twenties intent on escaping from her home in San Diego and traveling the world. While in Tahiti, she meets Sharp (Sam Clafin), an English sailor who wants to do exactly that by circumnavigating the globe in a yacht he built himself while working at a shipyard in South Africa. The two quickly fall in love and decide to help out a friend by sailing their boat back to California, but soon have their fateful encounter with a powerful hurricane that will leave them drifting in the middle of the ocean with little hope of survival. 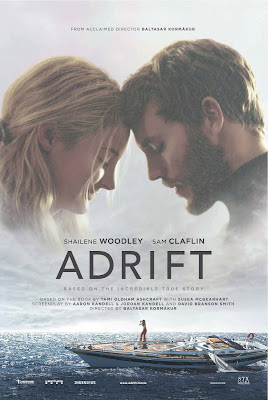 There's a strong story here, unfortunately Kormákur saddles the film with a flashback structure that does the narrative no favors. Adrift continually cuts back and forth between Tami and Richard's early relationship, and their plight on the open ocean in the aftermath of the storm. This positions the hurricane at the end of the film rather than the beginning, causing the film to skip a second storm entirely ("it was just a squall!" Tami dismisses, in an attempt to explain why the film cuts away from it so suddenly) in its build-up to the storm we all know is coming. Every time the film starts to create any dramatic tension, it cuts away in another flashback, ultimately using its climactic storm as an extended flashback that adds little to what we've already seen. It also suffers from some weak characterization, using Tami's vegetarian diet as an awkward plot point when she refuses to go fishing even when it becomes apparent that they may soon starve to death.

The film eventually hits us with a groan-worthy and painfully obvious twist that has been apparent since the opening shot of the film, treating the reveal like an M. Night Shyamalan-worthy reversal when it's really just an awkward plot device meant to create a story where there wasn't really one before. What's sad is that what actually happened is far more interesting than fake-out invented by screenwriters Aaron Kandell, Jordan Kandell, and David Branson Smith, and could have resulted in something closer to J.C. Chandor's similarly themed and infinitely superior All is Lost.

On the plus side, Adrift boasts some top-notch cinematography by Robert Richardson, who often shoots at water level as if the audience is right there in the ocean with them. At times it even recalls Lucien Castaing-Taylor and Véréna Paravel's brilliant 2013 avant-garde documentary, Leviathan, in the way Richardson allows the camera break free from the established confines of the frame. While it isn't as radical as Leviathan's unique spatial sensibilities, it's a strong element in a film with few other high points. The piano-driven score by Academy Award nominated composer Volker Bertelmann (aka Hauschka) is also quite lovely.

In the end, however, its all in service of a film that is fundamentally flawed from the ground up. The entire thing is based on a deeply dishonest premise. Had it been edited in a more linear fashion it might have preserved some of the story's inherent suspense, but the last-minute twist really undermines the credibility of the whole affair. There's a good movie in this story somewhere, but Adrift just isn't able to do it justice.