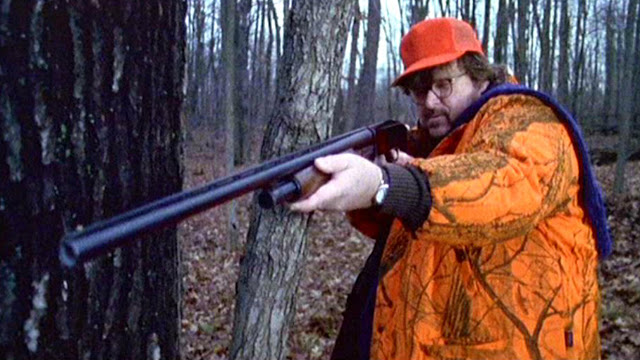 The most striking thing about Michael Moore's 2002 documentary, Bowling for Columbine, is how painfully relevant it still is. Despite having been made 16 years ago, it feels like it could have been released yesterday. Moore's incendiary examination of American gun culture feels as vital and in-tune with our society as ever. If anything, things have actually gotten worse in America, the 1999 Columbine massacre having been surpassed many times over as the deadliest school shooting in American history.

So it is perhaps with this in mind that the Criterion Collection is releasing the film on Blu-Ray for the first time. While those who find Moore's brand of agitprop to be distasteful are unlikely to feel any differently now, watching the film in 2018 is like getting hit by a lightning bolt. Moore occasionally overplays his hand (his ambush interview with Dick Clark adds little to the film), Moore has never felt as focused or as curious as he is in Bowling for Columbine. What sets this film apart from his other films, Fahrenheit 9/11, Sicko, Capitalism: A Love Story, and Where to Invade Next, is the fact that Moore isn't necessarily advocating for specific legislative action. He's simply asking a question - why do Americans murder each other with guns at a rate astronomically higher than the rest of the developed world? 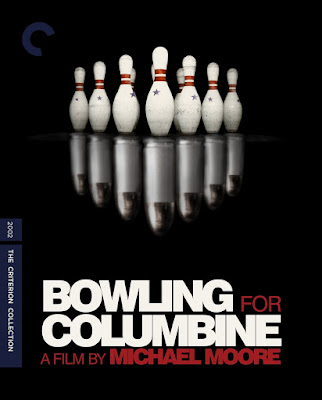 Is it our violent history? Surely the English and the Germans have equally violent pasts.  Is it the amount of violent video games and movies we consume? These entertainments are widely consumed in the rest of the world. Do we just have more guns? Canada is a nation of hunters and gun ownership is widespread. So what is it about America that leads to such a wildly disproportionate amount of gun murders? Moore never comes to a conclusion, but what conclusion is there to come to? So he turns his lens toward America's fetishistic love affair with guns, the seemingly unrestrained ease of access, and the NRA's rabid obsession with resisting all forms of gun control in the name of freedom at the expense of children's lives.

The villain here is the late Charlton Heston, former president of the NRA, whose rallying cry of "from my cold, dead hands" echoes through the film as the NRA descends on cities still grieving recent gun tragedies. Moore, a lifelong NRA member and avid hunter, never advocates for the abolition of the Second Amendment or for banning guns, but posits that much of America's obsession with guns can be traced back through our racist past and fear of the "other." His climactic showdown with Heston is appropriately awkward and difficult to watch, but it's also illustrative of a difficult conversation that we as a society still refuse to have.

Bowling for Columbine is not a film that necessarily benefits from a Blu-Ray upgrade. Moore's guerilla-style filmmaking doesn't lend itself to the highest quality footage in the first place. But the film has never felt more essential and necessary than it does now. What sets Moore apart from other political filmmakers (like, say, Dinesh D'Souza) is his grasp of the cinematic language and his inquisitive mind, always searching, always seeking. And whether or not he ultimately arrives at satisfactory answers is left to the viewer. He selectively edits and chooses the facts that most support his case (the sequence interviewing Canadians about American gun violence is most indicative of this unfortunate habit), but even when he wades into the weeds to prove a point, he never loses sight of the bigger picture.

At a time when children continue to die at the hands of firearms in ever greater numbers, Bowling for Columbine remains a key exploration of America's gun culture. That it is still so relevant is a tragedy in and of itself, but it has also never felt more important. This new Blu-Ray edition from Criterion is a welcome a return for a film that deserves a new day in the sun, so that hopefully in the near future it will at last feel hopelessly out of date.


BOWLING FOR COLUMBINE | Directed by Michael Moore | Rated R for some violent images and language | Now available on Blu-Ray and DVD from The Criterion Collection.