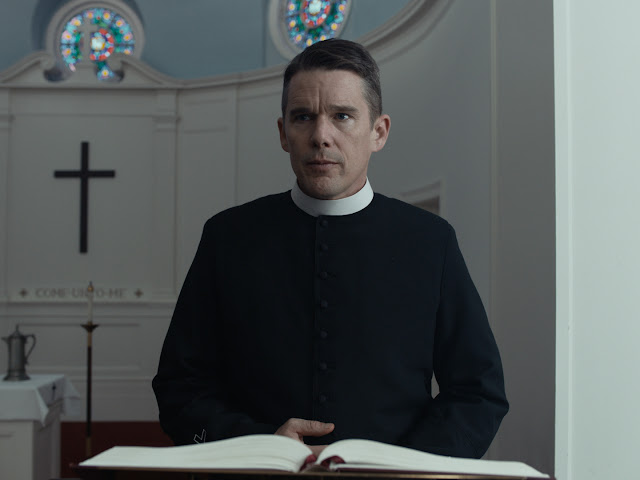 It has been 42 years since Martin Scorsese and Paul Schrader introduced us to Travis Bickle, the eponymous taxi driver of Taxi Driver, who befriended an under age prostitute (Jodie Foster) and set out to clean up his crime-ridden streets. Bickle has since passed into the cultural canon, thanks in part to Robert DeNiro's iconic performance. And while Schrader's new film, First Reformed, doesn't have any moments to equal Bickle's legendary "you talkin' to me?" monologue, much of that same rage toward rampant injustice shines through.

This time, our protagonist isn't a taxi driver, but the pastor of a small parish in upstate New York that is nicknamed "the souvenir shop." First Reformed is a historic landmark preserved by a local mega-church that has become something of a living relic, a curiosity where tourists can purchase t-shirts or hats. The church, much like the corporate entity of which it is an arm, no longer bears much resemblance to an actual house of worship. 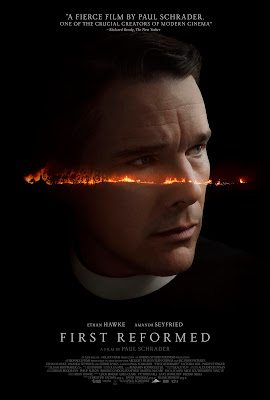 Reverend Toller (Ethan Hawke) dutifully goes through the motions each Sunday, offering his brief homily to an ever diminishing congregation. He wants little to do with the megachurch that sponsors him, but would rather shrug off any real pastoral duties to someone else. He drowns his frustrations with alcohol as he embarks on a year-long journey of recording all his thoughts in a journal that he intends to burn when it is complete.

Then one day he meets Mary (Amanda Seyfried), a pregnant young woman whose husband, Michael (Philip Ettinger) has just been released from a Canadian prison after being arrested during an environmental protest. Mary is worried about Michael's emotional state, and asks Toller to counsel him. Through their chats, Toller discovers a troubled young man who believes that it is a sin to bring a child into a broken world, where climate change will leave an uninhabitable planet behind for the next generation, and he wants his wife to have an abortion. It isn't long before Toller and Mary discover the true extent of Michael's radicalism, but rather than be repulsed by the violence Michael wishes to enact in order to save the planet, Toller becomes enthralled by it.

Disenchanted by the world around him, and exasperated by the commoditization of the gospel on display through his megachurch parent and its corporate sponsor, Toller embarks on a journey of faith of his own, as he questions not only his role as a steward of God's creation, but as an agent of God in a world where faith is just another product of capitalism and a tool of cynical politicians who put money and power over the God they claim to serve.

First Reformed is an angry howl of grief at a world gone mad. Schrader has given us a modern, more subtle incarnation of Travis Bickle through which to explore faith and the church's role in an increasingly convoluted world. What is the purpose of a church that chooses to look the other way as God's creation is destroyed? What happens to a church that exists simply to placate its followers rather than to teach hard truths? Is it moral to bring a child into a broken world? Schrader offers no answers, in fact you can feel him grappling with those questions in nearly every frame. 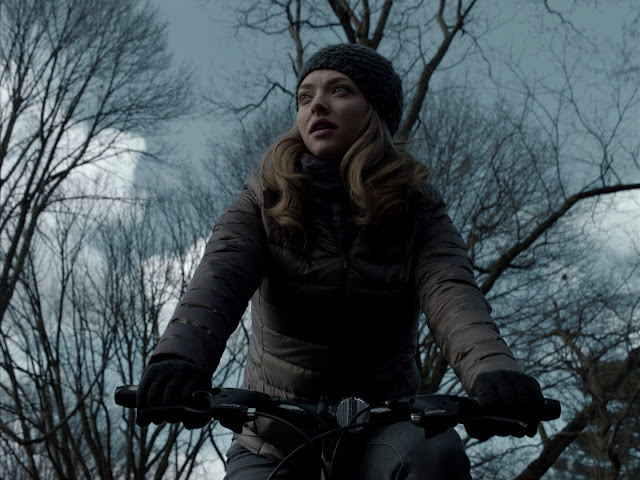 Schrader directs with a kind of hushed reverence that recalls the work of Bresson and Dreyer (Dreyer's Ordet springs most readily to mind), yet with a kind of apocalyptic fatalism that recalls Tarkovsky's The Sacrifice. The film is shot in a boxy 1.33:1 frame that gives its characters nowhere to hide, starkly exposed to a world that is no longer comforting or familiar, the old megachurch platitudes (recalling the insular, self-absorbed teachings of Joel Osteen) no longer holding any value when there is so much suffering beyond the church walls.

There's so much going on in First Reformed that it's almost impossible to fully absorb in one sitting.  Its musings on faith, sin, violence, capitalism, politics, morality, and the intersection of all of those things make for meaty drama. Schrader expertly builds layer after layer, building to an explosive climax that zigs exactly when we expect it to zag. That's part of what makes the film so special - every time we think we know where it's going, Schrader takes is somewhere else. It's a raw, ragged, angry work, born out a deep sense of exasperation and hopelessness in the face of rampant indifference to a world in pain. It is as if Schrader is exorcising his own demons here, working through his thoughts and feelings on the state of our world, using Reverend Toller as a vessel through which to peer into the void and ponder what it's all about in the first place.