As filmmakers go, Philip Dunne is not exactly a household name, even among critics and cinephiles. He is mostly known as a screenwriter, having penned the screenplays for films like How Green Was My Valley, The Ghost and Mrs. Muir, and The Robe. His directorial career is lesser known, and while he was a far more prolific writer than he was a director, he placed a unique stamp on the studio melodramas of the 1950s. 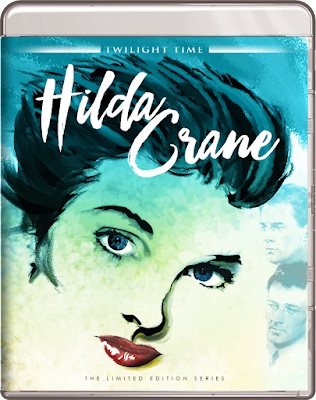 Twilight Time recently released two of his films on limited edition Blu-Ray - Hilda Crane (1956) and Blue Denim (1959). Both films are distinctly of their time, and yet somehow ahead of it. Hilda Crane is the story of a woman who returns to her hometown after two failed marriages to get a fresh start. The eponymous heroine (Jean Simmons) wants to "love like a man," playing the field without the need of being tied down. But the small minds that populate her small town won't hear of it, and when Hilda falls in love with two different men, a former flame (Guy Madison)  and a handsome French professor (Jean-Pierre Aumont), it creates a huge scandal and threatens to ruin her life completely.

Hilda Crane feels remarkably progressive at its heart. While it never really escapes its soap opera veneer (Dunne was no Douglas Sirk), the film's insistence that Hilda is doing nothing wrong seems somehow out of step with the mores of the era. The film was naturally advertised with an air of salaciousness, but it's not really - it's just a wildly over-the-top melodrama with a female protagonist who finds herself trapped in a world that expects different behavior from women than men.

It never really gets the chance to dealt with its themes on a deeper level, focusing instead on high drama and soapy histrionics. The same cannot be said, however, for Blue Denim. Starring Brandon De Wilde (Shane) and Carol Lynley (The Poseidon Adventure), as two teenagers in love (and in trouble), Blue Denim is a teen pregnancy drama that has all the trappings of an after-school special. And yet somehow, in 1959, Dunne avoided finger-wagging or moralizing. The film is based on a play by James Leo Herlihy and William Noble, and chronicles the young couple's terror and desperation when they realize what they have done, and what that means for the rest of their lives. 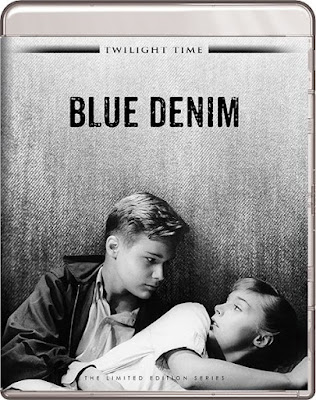 Unsure of what to do and unable to confess to their parents, they instead seek a back-alley abortion. While the word "abortion" is never uttered in the film, the idea feels somehow radical, even subversive. And while most characters in the film resist the idea ("it's nothing less than murder!" one of them shouts at one point), it is not the act of abortion itself that is seen as the problem as much as the danger of an underground procedure. Abortion was, after all, illegal in 1959, and the danger of one of these procedures hangs heavy over the film.

Dunne treats it all with a remarkable sensitivity, and while there are certainly melodramatic elements at work here, Blue Denim acknowledges its characters' humanity. Rather than scolding them for the choice to have premarital sex, it mourns the loss of their future due to their lack of education. Neither of them really know what they're doing, and in a moment of passion see their future go up in smoke, now faced with the reality of raising a family rather than pursuing an education and a career.

Of course, this being 1959, what is really being mourned here is the loss of De Wilde's future rather than Lynley's, but you have to admire Dunne's refusal to condemn his young characters' choices - in fact he even goes so far as to acknowledge Lynley's choice being the most important part of the whole thing, rather than what her parents or her boyfriend want. An early CinemaScope film, Dunne still tends to position the figures near the center of the frame, doing little with the added widescreen space. Yet it is in Blue Denim that Dunne's true directorial talent shines through. While he is most remembered as a great screenwriter, his tender, unassuming direction of Blue Denim shows that he was a filmmaker ahead of his time, slyly subverting the era's strict moral code through films that treated sensational subjects with grace and dignity, even if his reach often exceeded his grasp.


Hilda Crane and Blue Denim are both available on limited edition Blu-Ray from Twilight Time.