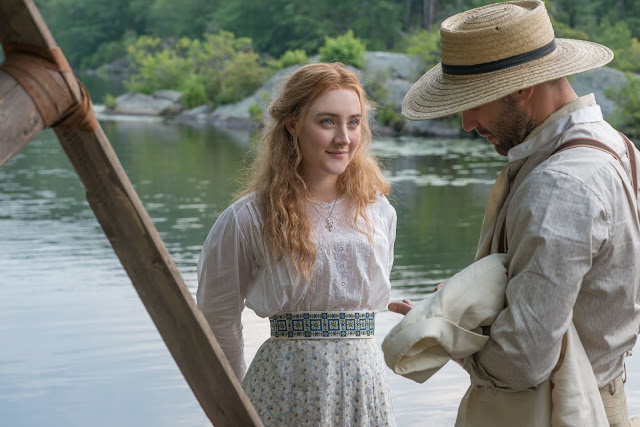 Go to any community theater production of one of Anton Chekhov's plays, and you're likely to find a well-intentioned, faithfully dramatic interpretation of Chekhov's words, but you're not as likely to find his often sly sense of humor shining through the text.

Chekhov's sense of humor is at the forefront of Michael Mayer's new cinematic adaptation of The Seagull. It is especially apparent in Annette Bening's boozy, megalomaniacal performance as Irina Arkadina, Chekov's supreme monster mother, full-time family matriarch and part-time self-absorbed actress.  Her lover, renowned playwright Boris Trigorin (Corey Stoll), joins her family for a weekend retreat, where he develops feelings for Nina (Saorise Ronan), the winsome love of Irina's son, Konstantin (Billy Howle), an aspiring playwright whose head remains firmly planted in the clouds, where his ambitions often supersede his talent. Also along for the ride is Masha (Elisabeth Moss), a depressive family friend with long-held feelings for Konstantin that he does not return. 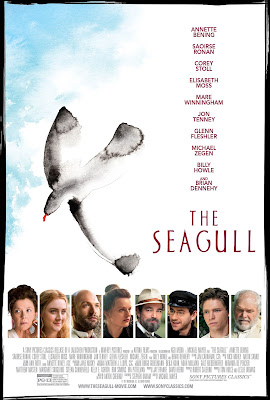 There's enough romantic drama here to full a Shakespearean comedy - everyone is in love with someone who is in love with someone else. Yet despite its comic trappings and often biting wit, The Seagull is, at its heart, a tragedy. Konstantin's all-consuming love for Nina fuels his work, even as she becomes Trigorin's latest muse, leaving Irina embittered and angry. The rage boiling at the center of The Seagull comes from Chekhov himself, who wrote the play as a kind of meta-theatrical critique of the pretensions he saw in artistic society. Theatre was changing around him, and Chekhov's text is filled with commentary on the push and pull between new kinds of theatre (like his own) and the old guard (represented by the stodgy Trigorin).

Much of that is lost, unfortunately, in the play's translation to the screen. Mayer plays it mostly straight, setting the film in the late 1800s when the play was written, but the whole affair seems to lack the thematic density that is so important to what Checkhov wrote. The humor is there, the production is sumptuously designed, the cast is stacked with top-notch talent. Yet it is as if the very translation of the film has left something behind on the stage. As such, The Seagull feels like a film without a foundation, the actors working on characters that don't have the building blocks they require. Only Bening is really able to take her character to the next level, embodying the aging Irina, who must watch as she is overtaken in nearly every way by the young ingenue, Nina, in much the same was as she was in her Oscar nominated role in Being Julia.

The Seagull is often regarded as the first of Chekhov's four major plays. It is a theatrical touchstone in more ways than one - Constatnin Stanislavky worked with Chekhov and used it to help develop his groundbreaking acting techniques, and influential acting teacher Uta Hagen made her stage debut in the play when she was only 18. And yet this film version feels somehow staid and safe, robbed of its natural theatrically and trapped by the confines of its own frame. It's a fine production, easy to watch and well-performed, but outside of its natural habitat it just never has the chance to soar.