Roy Ward Baker's Don't Bother to Knock marked the first starring role in a feature film for Marilyn Monroe, and while the 26-year-old sex symbol would go on to much higher profile films in much more iconic roles (Gentlemen Prefer Blondes, The Seven Year Itch), but her performance as a troubled babysitter in Don't Bother to Knock might be one of the finest performances the notoriously difficult star ever gave.

Stories of her on-set behavior have become legend - Monroe was often late to the set (or didn't show up at all), couldn't remember her lines, and insisted on having an acting coach with her at all times (an eccentricity memorably spotlighted in the 2011 film, My Week with Marilyn). And yet somehow it all worked - Monroe desperately wanted to be taken seriously as an actress rather than just a sex symbol. And while history has remembered her more as the latter, it's always disarming to revisit to her film work to see just how good an actress she really was. Despite her difficult behavior, her process resulted in some fine performances, and in Don't Bother to Knock she digs down deep to create a character as vulnerable as she is terrifying, with a volatility that never dips into empty histrionics. 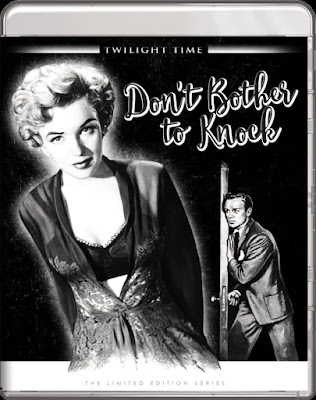 As Nell Forbes, a babysitter with a haunted past, Monroe embodies a woman slowly coming apart. Her eager uncle sets her up with a babysitting job in the hotel where he works, but she is less interested in spending time with the little girl than she is trying on her mother's clothes, jewelry, and expensive perfume. At first, she just seems like a shy young woman, but Baker gradually begins to reveal signs that not everything is as it seems - a glimpse of scars on her wrist, eating candy that she swore she didn't eat. After a man across the courtyard (Richard Widmark) catches a glimpse of her in the window, she begins a flirtation that becomes the catalyst for her breakdown, flashing back to a former lover who was killed during WWII. Her ensuing mental anguish will soon endanger her, her new lover, and the child as she flounders between fantasy and reality.

Don't Bother to Knock is a feverish, noir-like drama that speeds by at a brisk 76 minutes. Baker slowly ratchets up the suspense in almost imperceptible ways, so that the audience doesn't quite realize how badly things are going off the rails until the characters are in too deep to turn back. It also marked the film debut of 21-year-old Anne Bancroft, who plays a lounge singer previously involved with Widmark. Bancroft shares no screen time with Monroe until the very end of the film, but she radiates a gravity and wisdom far beyond her years, a maturity we would see again in her most iconic role as Mrs. Robinson in The Graduate 15 years later.

It may not have been particularly well received upon its release, and has been mostly forgotten in favor of Monroe's more high-profile roles, but Don't Bother to Knock remains a surprisingly potent and thrilling film, treating the mental illness of its central character with surprising grace, never blaming Nell for her own trauma. It takes what could have been a lurid plot (an older single man meets up with a young, naive babysitter in a hotel room) and turns it into a wickedly plotted thriller that remains an overlooked high point in Monroe's storied career.