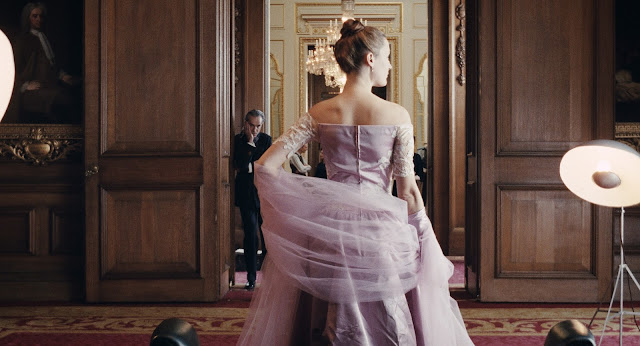 Phantom Thread is one of those films whose riches are best revealed over multiple viewings. On my first viewing, I was enraptured by director Paul Thomas Anderson's style, and by what is reportedly Daniel Day Lewis' final performance. Upon second viewing, I realized just how funny this film really is.  Once you know where everything is going, the threads of Anderson's gorgeous tapestry begin to reveal themselves. This is not the veneration of a "difficult genius" as some have accused it, it is a lampoon of those figures. 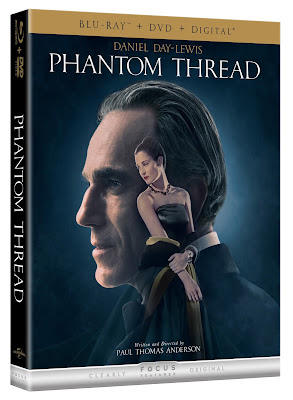 As Reynolds Woodcock, a temperamental English fashion designer, Day-Lewis has never been funnier. He's a domineering man who likes everything just so, a creature of habit and routine who flies into fits of rage whenever anything is out of place. On the surface, his relationship with his girlfriend, Alma (the luminous Vicky Krieps), a waitress he meets on a weekend in the country, seems emotionally abusive. He is prone to fits of anger, hurls insults when he is disturbed, and finds himself annoyed by even the most innocuous of sounds. Yet underneath the bluster is a little boy who just needs to be cared for, as evidenced by the unusual and vaguely kinky arrangement the two come to in the end involving poison mushrooms. That has been a point of contention for some, that the film is somehow an apologia for toxic masculinity. I think it's actually the opposite. Woodcock is a laughable figure, a petulant and immature child; Alma doesn't so much tame him as she does control him. She refuses to be bullied, and takes matters into her own hands to quell his childish outbursts. She's the one with the real power here, taking the great man down a peg an slyly deflating Reynolds' preening machismo.

The Blu-Ray thankfully preserves the grainy textures of Anderson's cinematography. This is one of the most tactile films I've ever seen, you can almost feel the fabric of Mark Bridges' sumptuous Oscar winning costumes between your fingers. Every thread of it is woven so carefully, so purposefully; Phantom Thread is an intoxicating brew of sensual pleasures. Day-Lewis is reliably brilliant, but it's Krieps and Lesley Manville as Reynolds' sister Cyril who really own this movie, outmaneuvering and shutting down Reynolds' ridiculousness at every turn. He's a petty tyrant, but Alma and Cyril not only know how to hold their own, they're the real brains of the operation.

The special features on the Blu-Ray offer little insight into the film, but why should it? The film stands as its own haunting enigma, both romantic, disturbing, and deeply funny. The special features offer brief glimpses into Anderson's process (a reel of camera tests featuring commentary by the filmmaker is especially fascinating), and a mock fashion documentary about the House of Woodcock that feels like a newsreel straight out of the 1950s. The real star here, of course, is the film, which remains one of the high points of cinema in recent memory. It's a luscious, bewitching concoction that's as rich as Reynolds' cream and as potent as Alma's poisoned mushrooms; in short - it's a brilliant and scintillating feast that will likely be long remembered.