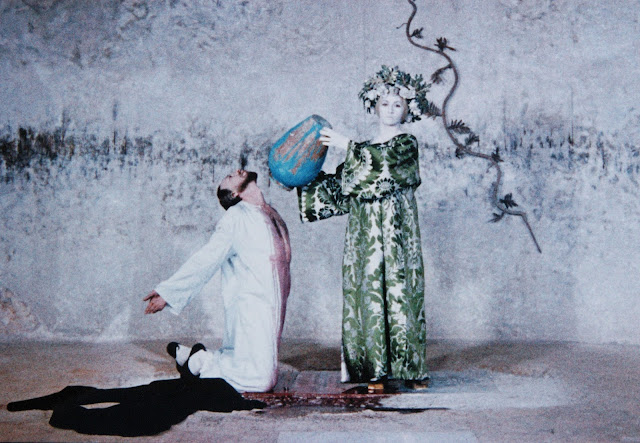 What to make of Sergei Parajanov's almost defiantly formless experimental film, The Color of Pomegranates? The film has been the subject of much controversy and academic debate since its release in 1969, after it was butchered by Soviet censors who found it "unintelligible to the masses," and therefore anti-Soviet. The film was intended to tell the life story of 18th century Armenian poet, Sayat-Nova (which was Parajanov's preferred title), but it was ultimately deemed to not have enough to do with him, and the title was changed to The Color of Pomegranates, which endures to this day. 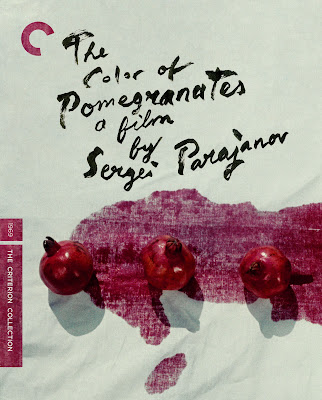 It's true that the film is not a conventional biopic by any stretch of the imagination. Instead, Parajanov takes us through a series of tableaux inspired by medieval Armenian art that plunges the audience inside the creative world of its subject. The Color of Pomegranates was never meant to be a literal interpretation of Sayat-Nova's life (he is shown here from childhood all the way to death as an old man, sometimes all at once), rather an impressionistic journey into his mind. The result is 79 of the most dazzling minutes in all of cinema, a dizzying collection of abstract images that bring the poet's words to life. It's a radical departure from the grim, realistic style favored by the Soviets at that time, so it's not difficult to see why it was such a shock to the cultural system.

It is because of its free-wheeling, narrative-free style that it is almost impossible to judge on its own. The film is like nothing else out there - recalling the work of the early surrealists in its dogged refusal to be interpreted literally, set in a medieval world that looks like something out of Pasolini's Trilogy of Life. And yet it is so vivid, so singularly beautiful, that it becomes a completely mesmerizing experience. What makes the film so extraordinary is that it is so open to interpretation. Parajanov breaks up the tableaux withs snippets of Sayat-Nova's poems, recreating the lyrical images in such a way that it allows the viewer to read them however they wish. Each tableau is a rich tapestry of breathtaking imagery and vivid color, from the deep red juice of pomegranates flowing through white muslin, to water cascading down walls and bursting forth from saturated books, to grape juice flowing over stone, Parajanov's keen visual sense is truly incredible.

All of this is beautifully captured by the new Criterion Blu-Ray, which reconstructs Parajanov's original cut from a restoration by The Film Foundation’s World Cinema Project and the Cineteca di Bologna. Don't come here looking for an explanation of the film's surreal, dreamlike world, come to lose yourself inside the mind of a poet, where suddenly every thought, every images, becomes a thing of profound and delicate beauty, opening one's eyes to a world of exquisite possibility. Rather than capture the life of a poet, it captures his soul - and that makes The Color of Pomegranates something altogether unique.