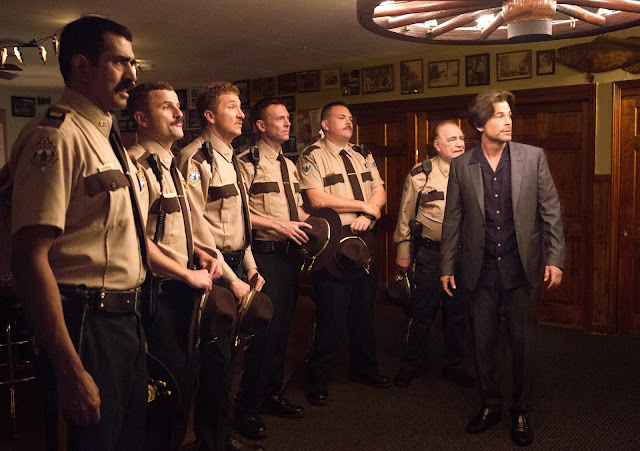 The original Super Troopers, written and directed by comedy team Broken Lizard, didn't exactly light up the box office when it was released in 2002, but the film has amassed enough of a cult following on DVD in the 16 years since its release to warrant a belated sequel. As is common with comedy sequels, especially those that arrive so long after their popular predecessors, Super Troopers 2 doesn't quite have the same comic verve, spending its time either trying too hard to outdo the original, or "playing the hits" by referencing the jokes that everyone fell in love with the first time around. 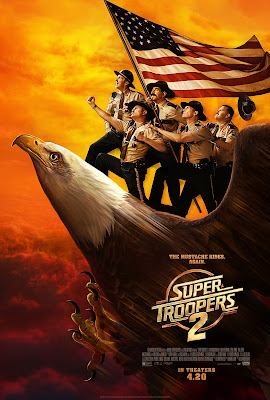 Still, for fans of Super Troopers, there are worse ways to spend a couple of hours than in the company of these characters, who prove that there are still a couple of laughs to be had from this concept. This time around, the titular Vermont state troopers are called back into action after spending the last 15 years off the force for the events in the first film, to oversee the transition of a small tract of Canadian land that was found to actually be within America's original boundary markers. It isn't long before they're back up to their old shenanigans, as they face a town full of angry Canadians bitter about their newfound nationality, and a group of rival Mounties who aren't quite ready to give up power in their territory just yet. Those rivalries come to a head, however, when the troopers stumble upon a stash of drugs that leads them to an international smuggling operation that goes deeper than any of them expected.

Like its predecessor, Super Troopers 2 is an exceedingly silly film, with the inept policemen at its center constantly finding new and spectacular ways to screw up. The antics wear a bit thin this time around, as the film tries to be bigger and better than the original (to no avail), and newcomers to the franchise may find themselves a bit confused by all the references to the original's jokes. But when it does stumble upon new moments of inspiration, it's actually a very funny film. Like a modern day "Keystone Cops," the Super Troopers take routine policing and turn it into one epic failure after another. And while some of the intentionally obnoxious humor overstays its welcome (the film relies too heavily on Kevin Heffernan's Farva, a perpetual "that guy"), it actually manages to make their ineptitude somewhat endearing.

Was Super Troopers 2 necessary? Not really, no. Fans will enjoy seeing the gang back together, but it hews to closely to the original film to justify the 16 year long wait for a sequel. It's disappointing to see a sequel to a film almost defined by its anarchic sense of humor that plays it so safe. It's not a bad film on its own, but one can't help but wish it had taken the time to distinguish itself rather than returning to the same well.  It's kind of like going to a high school reunion - you're still telling the same stories from decades ago since you no longer have a common frame of reference, and they're still amusing, but not quite as funny as they were when they were fresh. It's a hit-or-miss comedy that has enough solid laughs to justify itself, but after a 16 year long gap between films, it's not quite enough to make the wait seem worth it.