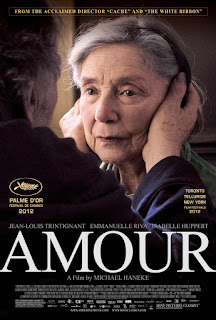 Watching Michael Haneke's aptly titled Amour was a deeply personal experience for me. Two years ago, my grandmother passed away from Alzheimer's Disease after spending more than a decade immobile in a nursing home bed. My grandfather sat by her side every day, feeding her, cleaning her, wheeling her around the nursing home in her wheelchair, always attentive, always faithful.

I learned what true love is from my grandfather, and in a very immediate sense, I have witnessed Amour first hand. While the stories come to a very different conclusion, the film hit very close to home nevertheless. It is possible that I am more susceptible to its power than most, but I am also in a better position to see just how close it cuts to the bone. This is what it looks like, and it is as painful as it is beautiful. Amour is, in some ways, Haneke's most accessible film, but it is also one of his most horrific. Make no mistake, this is a horror film disguised as a love story, and allows Haneke to delivers some of his most powerful and haunting work to date.

Georges (Jean-Louis Trintignant) and Anne (Emmanuelle Riva) are both retired music teachers in their eighties who have had a long, full life together. They mostly spend their days listening to music, attending concerts, and living out their twilight years in their spacious apartment (an increasingly confined space from which Haneke's camera never strays). Then one day, Anne has an episode, seemingly blanking out from the world. When she returns, she has no memory of the non-responsive period, as if it never happened. She has had  a stroke, and so begins a slow descent into the ugliest abyss of old age. It starts out small, Anne's right side being mostly paralyzed but her mind remaining intact. She becomes confined to a wheelchair, becoming more and more frustrated by her own dependence on others as she defiantly insists on keeping what independence she has left.

She is visited by her daughter (Isabelle Huppert), and a former student, now a world famous pianist, who is shocked to find his former teacher in such a pitiful state. Anne is put off by their blatant displays of pity as she continues to try to live life as normal. But fate has other plans for her, and as she continues to deteriorate, she becomes more and more lost in the fog of old age, leaving the stalwart Georges to care for her, alone with his memories of better days gone by, and a wife he barely recognizes, a shell of the woman she once was. Facing the end of a lifetime together, lost and alone, Georges faces the greatest challenge of his life, a challenge that will push their love to the brink and beyond.

The results are every bit as devastating as one could imagine, and more. But Haneke treats the film as more than just a tragedy, he treats it is a tribute to deep, passionate, all encompassing love. That makes it perhaps Haneke's warmest film to date, but it's no less painful for that. Amour strikes such a deep emotional chord because it offers a glimpse into a future that could literally belong to any of us. That is perhaps what makes the film so deeply unsettling, it's that chilling realization that this could very well be us one day lying helpless on a bed, unable to speak or move or feed ourselves, incontinent and alone in a haze of decrepitude. Therein lies Haneke's typically bleak outlook we have seen manifest itself to frightening effect in films such as Funny Games, Cache, and The White Ribbon, but this time he imbues it with something deeper, a glimmer of hope, however tragic, that makes the film all the more profound. The idea that one can find a love so deep that it will remain by your side even in the darkest and most difficult of circumstances.

What viewers are most likely to take away from Amour, however, is the incredible and moving performance by Riva. It's the most stunning work by any female actor this year, matched only by Daniel Day-Lewis' portrayal of Abraham Lincoln in Steven Spielberg's Lincoln. It is a staggeringly immersive, utterly heartbreaking performance that defines what it means to be an actor. In one especially wrenching scene, Georges tries to lead Anne in a familiar song, an old favorite. The words coming out of Anne's mouth are little more than gibberish, but the life behind her eyes as she tries to form the lyrics makes for one of the most poignant moments in film this year. Riva's work crowns an impressive career that is mostly unknown to American audiences, but if there is any justice in the world she will be remembered for this. She’s so good, in fact, that she has often unfairly overshadowed Trintignant, whose quiet resolve is no less powerful than Riva’s own, more outwardly impressive performance.

The film is titled Amour for a reason. Love isn't always pretty. But real love, true love, survives all things. Haneke has no time for the simple platitudes and shallow sentimentalism that so often characterize movies about love. Instead he portrays it with a grim, clear eyed honesty. This could very well be the natural conclusion to the bright, carefree happiness of a wedding day, or of a long and happy life. Haneke's austerity spares us none of the gory details, but there is a certain beauty to be found in that frankness, a light in the seemingly impenetrable darkness. Deep at its core, Amour displays a softer side of Michael Haneke that we have never seen before, and the result is something profoundly moving. This is love at its natural conclusion, after the happy endings have faded away and the musical swells have died down - just two elderly people facing the end together with all their memories and imperfections. But what those other love stories never show us, and Amour so bravely does, is that love in winter is sometimes the strongest. If love truly does overcome all things, then this is its ultimate test, and Haneke's searing vision is destined to haunt until our dying day.