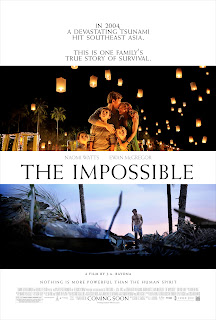 Say what you want about the political implications of focusing on a white family in the midst of an Indonesian tragedy, let's focus on the film itself for just a moment. Juan Antonio Bayona's The Impossible tells the incredible true story of a family vacationing in Indonesia who is separated by the devastating tsunami that wreaked havoc on the country in 2004. Thousands of people lost their lives in the disaster, which also destroyed many families and caused billions of dollars worth of damage in one of the worst natural disasters in modern history.

The Impossible finds light in that darkness, an almost miraculous tale of survival and perseverance that triumphed over all odds. Is it a bit too on the nose? Sure. Bayona knows how to pull the audience's heartstrings, and he does so with no apology. But he does it well, and it's hard to fault  a man for pushing so many buttons if he pushes the right ones. The film certainly smacks of typical Hollywood triumph of the human spirit dramas, but when it is this well crafted and moving one can't help but admire it.

The biggest argument I've seen leveled against The Impossible is that it focuses on a Caucasian family during a tragedy that occurred in Indonesia. I understand the criticism, but I disagree with it, because the race of the central family is, I think, ultimately irrelevant. Not only does the fact that this family is lost far away from home add tension to the story, but these are real people with an extraordinary story that deserves to be told. This is the kind of story that should transcend politics, not ignite racial arguments from well-meaning but misguided critics who seek to reduce everything to political finger pointing. Critics are often guilty of projecting their own political biases onto a film rather than critiquing the film at hand (and I know I've been guilty of this as well), but to reduce such an amazing story to "they shouldn't be white!" seems incredibly reductive to me.

It is not in any way cheap or offensive to focus on a European family. Had the story been made up there may have been more of an argument there, but it wasn't. It's true. And this family's story isn't any more or less worthy of being told because of the color of their skin. That kind of thinking is myopic and reductive to the conversation, I think, even though those that bring it up have the exact opposite intention. This is a human story, not a racial one; anything else is being projected on it by the viewer.

Most people aren't going to come away from The Impossible offended by the race of the protagonists  They're going to come away moved by the the story, as well they should. That is, after all, the point of the film. The only legitimate thing you could accuse Bayona is underlying the story's emotions a little too boldly and schematically. But even that seems irrelevant in the face of such impressive craft. The opening tsunami sequence is a work of breathtaking skill, both horrifying and harrowing. Bayona makes it thrilling without exploiting the tragedy of the event, and it's a real shame that the film was left off of the Oscar shortlist for Best Visual Effects, because it certainly deserves recognition in that category.

It's best shot for Oscar recognition is Naomi Watts, who gives a stunning performance as Maria. The real standout for me, however, was young Tom Holland as her oldest son, Lucas. Holland almost carries the entire film on his back, as it is his resilience and emotional journey that really gives the film its heart. I'm sure the film will inspire many to roll their eyes at its bald-faced emotionalism, and that's okay. There is certainly a Hallmark channel vibe to the whole affair. But Bayona (who previously impressed with the chilling Spanish ghost story, The Orphanage) is clearly a director with a terrific eye, infusing the film with almost Spielbergian flair. He makes up for its occasionally shameless manipulation with a genuinely sincere sense of hope. The Impossible may be schmaltz, but it's damn good schmaltz. It's the kind of story that is so incredible, so impossible, that it can only be true.