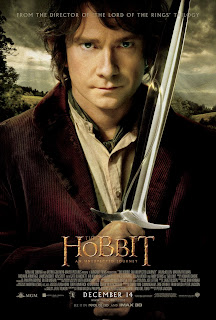 In one of my favorite scenes from The Hobbit: An Unexpected Journey, Galadriel (Cate Blanchett) turns to Gandalf (Ian McKellen) and asks "Why the halfling?"

Gandalf turns to face the camera and replies:


Saruman believes it is only great power that can hold evil in check, but that is not what I have found. I found it is the small everyday deeds of ordinary folk that keep the darkness at bay. Small acts of kindness and love. Why Bilbo Baggins? Perhaps because I am afraid, and he gives me courage.

I have returned to that quote many times in the days following the horrific shooting at Sandy Hooks Elementary on Friday. I have also read many snide dismissals of The Hobbit by cynical critics quick to deride Tolkein's simple fantasy tale and Jackson's sprawling adaptation (and especially his use of 48 fps).

One of the criticisms I have heard the most is that the film is too long, and that turning a relatively short novel into three nearly three hour long films amounts to little more than hubris on Jackson's part. I disagreed from the start. But I disagree now more than ever. The world needs more films The Hobbit, and Friday's tragedy reminded me why. 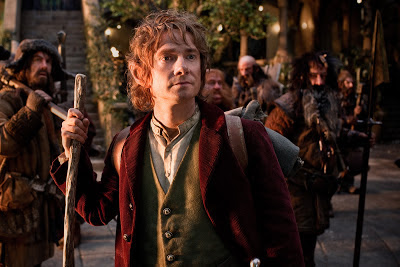 We live in a dark world indeed if a gunman can walk into an elementary school and indiscriminately slaughter six and seven year olds. It's an evil that defies all words, that boggles the mind. And Friday afternoon, all I wanted to do was escape from this broken world into a world like Middle Earth. Where good is good and evil is evil and good always triumphs. Simple? Yes. Realistic. Sadly not. But this is what we need right now. Not the kind of arrogant cynicism that has so pervaded reviews of this film. I often grow weary of the kind of criticism that demands some kind of deep intellectualism from every film, ignoring films that are simply a well told story.

I grew up listening to stories of Bilbo Baggins from my dad. Not only did he read The Hobbit to me, but he would often make up new adventures for Bilbo and Gandalf to go on, adventures that were mine and no one else's. There was a whole world to explore in Middle Earth, and I got to go there and back again every night.

Jackson's film may be long, but it unfolds like a campfire story, a ripping yarn filled with dwarves, orcs, elves,  goblins, giants, and a lost treasure in a kingdom under a mountain guarded by a fearsome dragon. I don't care that it features a wizard in a sled pulled by rabbits. It doesn't bother me that the tone is lighter than that of The Lord of the Rings. That is what Tolkein meant it to be. The Hobbit was written for children, and Jackson's film speaks to the child in all of us. It is a story of simple courage, filled with wonder and grandeur on a level that movies just don't see that often. Jackson's elegant direction takes these stories to a whole new level, treating them with the respect and mythos they deserve. These are our modern myths. As Samwise Gamgee once said:


It's like in the great stories, Mr. Frodo. The ones that really mattered. Full of darkness and danger, they were. And sometimes you didn't want to know the end. Because how could the end be happy? How could the world go back to the way it was when so much bad had happened? But in the end, it's only a passing thing, this shadow. Even darkness must pass. A new day will come. And when the sun shines it will shine out the clearer. Those were the stories that stayed with you. That meant something, even if you were too small to understand why. But I think, Mr. Frodo, I do understand. I know now. Folk in those stories had lots of chances of turning back, only they didn't. They kept going. Because they were holding on to something. That there's some good in this world, Mr. Frodo... and it's worth fighting for.

These are the stories that really matter. There are those in this world that seem to want to stamp out that joy that they bring, to somehow lessen or discount it. But sometimes, this is exactly what we need, and it couldn't have come along at a better time. I could have stayed in that world for three more hours, and then three hours more. If only to forget, for just a little while, that the world outside can be such a painful place, and to be reminded that there is some good still worth fighting for. Why Bilbo Baggins? Because his innocence and purity are something sorely missing in today's world. He's not a dark, brooding hero. He's a small hobbit who does extraordinary things, whose simple acts of kindness and love can hold the darkness at bay, if only for a few hours. And I can't wait to go on another adventure with him.
Email Post