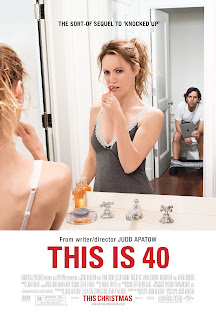 I've seen quite a bit of critical cynicism going around in the last few weeks regarding Judd Apatow's latest film, the "sort-of sequel to Knocked Up," This is 40. I'm not sure if it stems from the film hitting too close to home, or some kind of subconscious jealousy, or some other unknown baggage, but I didn't see any of the strangely personal problems so many critics seem to have with it.

It's true that the characters can be shrill, whiny, selfish, and often just willfully ignorant of the other characters' problems and points of view. But so can anyone, and therein lies the beauty of Apatow's work. He makes raunchy comedies, certainly, but there is always something deeper at work in them that is exceedingly rare in this type of film. Critics often demand smarter comedies, but when one like this falls in our laps, why do we turn up our noses? This is 40  is an intelligently written, readily identifiable comedy that holds a mirror up to its audience in a way that could easily make many a little uncomfortable, and that's what makes it so terrific. 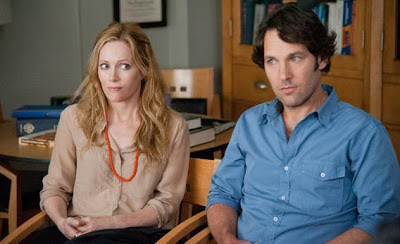 Picking up five years after the events of Knocked Up, This is 40 returns us to the world of Leslie Mann and Paul Rudd's Debbie and Pete. Seth Rogen and Katherine Heigl are nowhere to be found this time around, as Apatow chooses instead to focus on the domestic life of Debbie and Pete, now on the cusp of their 40th birthdays wondering what happened to their seemingly lost youth. They mostly spend their days caught in a routine of their own devising  Debbie runs a clothing store where she finds herself increasingly jealous of the tight, sexy body of one of her employees (Megan Fox), while Pete's record label is struggling to survive under his outdated taste in music and refusal to modernize. Their kids (played by Apatow's real life daughters, Maude and Iris) fight constantly, their oldest daughter is a mass of hormonal teenage moodiness, prone to whining and temper tantrums, while the youngest enjoys needling her every chance she gets.

While Debbie tries to keep everything together, Pete looks for reasons to escape, often retiring to the toilet to play on his iPad just for a brief respite from all the tension. How did their lives come to this? What happened to the marital bliss they once shared? As Pete and Debbie struggle to keep their family together through financial struggle and personal crisis, they will discover who they truly are, and that life, even at its most frustrating, can be incredibly, vibrantly beautiful. 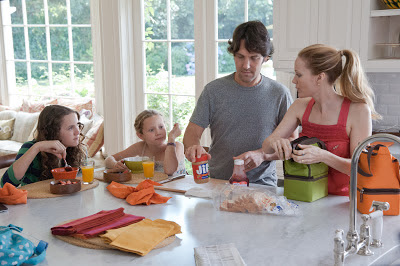 There has always been a deeply personal undercurrent running through Apatow's films, but never has it come so blatantly to the fore as does in This is 40. It feels almost autobiographical (and not just because of the presence of Apatow's actual children). And while it may seem shrill at times, and Mann's incessant nagging can become grating, that's kind of the point. Apatow handles the midlife crisis with a surprising amount of grace and dignity, delivering the laughs while also exploring Gen X angst with disarming aplomb, without wallowing in self pity or baseless sentimentalism. He is aided by an impressive cast of supporting players, from Albert Brooks and John Lithgow as troublesome in-laws, and Melissa McCarthy in a hilarious cameo as the angry parent of her daughter's young boyfriend at whom Debbie lashes out.

First world problems? Absolutely. But these are the kind of things people face every day, the natural ebb and flow of relationships that may seem trivial to the outside world, but make up the core of every day existence. Apatow has a keen eye for this sort of thing, and has established himself as a kind of voice of his generation. This is 40 cuts to the quick, but it's also very, very funny. Apatow manages to find humor in the stress and awkwardness of every day life, but he also finds the tenderness of familial love in a way that is free of cynicism or irony. I can see how some accuse it of being whiny or fixated on trivialities, but we're all guilty of such things. What This is 40 is, is brutally honest. How one reacts to that often depends on the eyes of the beholder and the baggage they bring to it. If Apatow makes us squirm while we laugh along, then he's probably hit the nail right on the head, and he hits that mark dead on more often that not. It's one of his finest and most mature works to date.