Review | "Mea Maxima Culpa: Silence in the House of God" 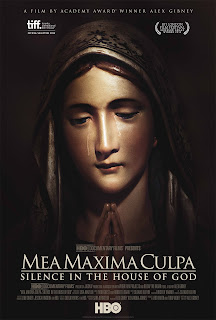 The child sex abuse scandal that has rocked the Catholic Church over the past decade is perhaps one of the most volatile, controversial, and heartbreaking events of our time. What has been in the news is shocking enough on its own, but Alex Gibney's incendiary documentary, Mea Maxima Culpa: Silence in the House of God sheds light into some of the darkest corners of the scandal, exposing a breathtaking conspiracy we only thought we knew.

Mea Maxima Culpa (which translates as "my most grievous fault") uses the sad story of Father Murphy, who abused hundreds of boys at a school for the deaf over the course of several decades, as a jumping off point for a shocking expose of apathy and active cover-up amongst Catholic authorities. Gibney uses chilling testimony told through sign language from some of the victims themselves, and voiced by talent such as Chris Cooper and Ethan Hawke, to paint a broad portrait of a disease that has infected the Church for literally thousands of years, tracing back evidence of abuse to the very beginning of the Catholic church.

What is most disturbing about the film, however, is its connection of the cover-up the the very highest levels of the church, and most damning of all, to Pope Benedict XVI himself. When he was still Cardinal Ratzinger, Benedict personally oversaw every single accusation of child abuse, most of which resulted in priests being relocated or returned to their churches to abuse again. To his credit, Gibney doesn't seem to be on a crusade to bring down the Church or attack the faith itself. He makes it very clear that his issue is with the insular culture of silence and unwillingness to accept blame that has helped propagate this sickness throughout the Church, and especially its lifting of priests to a level that is somehow more then human and above sin. Gibney portrays Benedict as a man who is truly concerned about the situation, but is caught between admitting to years of Church culpability or maintaining a face of strength and infallibility in the eyes of the faithful.

The beating heart of the film, however, is the first hand accounts of the victims of Father Murphy, one of the most notorious pedophilic priests. These brave men were the first to stand up and say "enough," exposing the scandal for the first time. Gibney's exploration of their fight for recognition, first within the Church, then in the public square, is a testament to their bravery. Even as Church authorities focus on the guilty priests rather than the victims, Mea Maxima Culpa pays tribute to those fearless victims who risked everything to put an end to this abuse. Even in the face of such staggering evil, Gibney finds a story of simple heroism, a light cutting through widespread darkness. Make no mistake, Gibney is on a crusade to expose decades of cover up, but he has also crafted a lyical and haunting documentary that finds something to celebrate even in the darkest of situations. It's a deeply disturbing film, but one whose power simply cannot be ignored. Few documentaries ever really get the chance to change the world. This one might actually do just that.