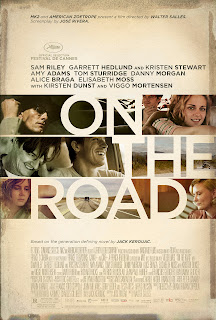 As a fan of Walter Salles' The Motorcycle Diaries, I had high hopes for his cinematic adaptation of Jack Kerouac's seminal chronicle of the "beat generation," On the Road. On paper it seems like a perfect match of director and source material, destined to recapture the free spirited magic that Salles brought to the story of young Che Guevara's life changing journey across South America.

The actual film, however, falls disappointingly short. Full disclosure - I have never read Kerouac's novel, nor am I a fan of beat culture in general. So on a personal level, I found the film more than a little off-putting. It was actually rather disconcerting to find myself feeling like an old man shaking my cane at the television shouting "you dang kids!" at their seemingly never ending parade of bad decisions. But beyond my own personal discomfort with the characters' empty hedonism (which, admittedly, isn't exactly celebrated so much as held up as the folly of youth), the film itself is a bit of a mess. Kerouac's free flowing prose just doesn't translate well to film, despite Salles' most valiant attempts.

That stream of consciousness style comes across as unfocused in the film, which seeks to capture the free-spirited essence of one Dean Moriarty (Garrett Hedlund), a devil-may-care restless soul determined to shuck the expectations of society and carve his own path through life. The film itself centers around young Sal Paradise (Sam Riley), a struggling writer who wants to break free and find himself. He meets the enigmatic Dean and his girlfriend, Marylou (Kristen Stewart), whose open, strangely bohemian relationship is like nothing Sal has ever seen. The three of them set off on a road trip, where they encounter various characters (played by an impressive, if underused, cast of A-list talent such as Viggo Mortensen, Amy Adams, Steve Buscemi, and Kirsten Dunst) who each affect them in a profound way. It is a road trip that will change their lives forever, but some of them will move on, and others never will.

On the Road the book is pretty much the prototype for every road movie of self discovery ever made, so by now many of its elements seem like cliche, when this is actually where they originated. The problem is other, much better movies have already covered this territory. Sean Penn's Into the Wild treads very similar ground, to much greater success, as does Alfonso Cuaron's Y Tu Mama Tambien, whose central triptych shares a journey not unlike that of Kerouac's three heroes. It doesn't help matters much that in order to capture Kerouac's spirit, Salles has a narrator quote directly from the book, accompanied by pattering bongos in Gustavo Santaolalla's score. It gives the affair the feel of some sort of 1950s poetry slam, which may well be the intent, but such things have been so often lampooned that it merely serves to plunge the film into self parody. I felt like I was watching an episode of "Dot's Poetry Corner" from "The Animaniacs." It's hard to take Kerouac's meandering prose seriously when it's being accompanied by the very instruments that have been used to parody it in the decades since, and it serves more to pull the audience out of the picture rather than draw us in.

Strangely enough, the strongest aspect of the film is the performance of Kristen Stewart. I've been hard on Stewart in the past, mostly for her almost non existent presence in the Twilight films, and her being wildly miscast in Snow White and the Huntsman, but in Salles has found the perfect avenue for her wispy earthiness in Marylou. She hasn't seemed this alive in a film since, interestingly, Into the Wild. This is clearly the kind of film she responds to creatively, and it shows. It's quite possibly the strongest work of her career, and showcases her as a talent with promise, rather than a warm body in a soulless franchise.

It's a shame, then, that the film around her never steps up its game beyond shallow, simplistic imitations of Kerouac's style. It never quite captures the vibrancy or the timbre of his writing, even when just lazily quoting the most famous passages of the novel. I wanted to feel something, but I never did. It is a journey that felt as alien to me as if I was watching it in another language without subtitles. These characters may be searching for themselves, for freedom, for the meaning of life, but the film never seems to go that deep. Rather they merely seem to be flouting taboos just for the sake of challenging conformity than anything else. It's a surface imitation of philosophical rambling than any real introspection. One would be better served to seek out a DVD of The Motorcycle Diaries, a film about personal discoveries that reach a much deeper, more relevant conclusion. Teenagers of every generation have always sought to set themselves apart from the status quo, but what sets On the Road apart from, say, a film like Stephen Chbosky's The Perks of Being a Wallflower, is that the soul searching they do stems more from selfish hedonism than any tangible sense of connection to the world around them. I'm fully prepared to accept that this is just not a film that spoke to me on a personal level, but it also never really achieves its own goals either. Salles has been on this road before with much more success, and this trip just feels gratuitous, lost in its own haze of beatnik navel gazing.