Salon is reporting that Dinesh D'Souza, the director of the controversial anti-Obama documentary, 2016: Obama's America, is complaining that the Academy snubbed him for his conservative beliefs when they left his film off the Best Documentary shortlist. 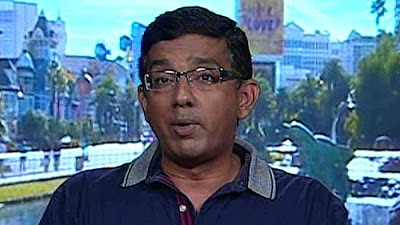 
“I want to thank the Academy for not nominating our film. By ignoring ’2016,’ the top-performing box-office hit of 2012, and pretending that films like ‘Searching for Sugar Man’ and ‘This Is Not a Film’ are more deserving of an Oscar, our friends in Hollywood have removed any doubt average Americans may have had that liberal political ideology, not excellence, is the true standard of what receives awards.”

It's bad enough that he's whining about being snubbed, but by trashing other directors' films (especially the brilliant This is Not a Film), he has reached a new low in.

Here's the thing - 2016 is a hit-job, a film that is borderline character assassination. No matter what your political beliefs are, this is not a good movie. It's a heavy handed, one sided film that would be laughable if it weren't so self serious (and self absorbed...D'Souza manages to make a film about Barack Obama all about himself). D'Souza makes wild assumptions about Obama's character and beliefs, most egregiously asking psychiatrists to examine the relationship between Obama and his mostly absent father, and infer how this would affect his worldview and ability to govern. These doctors have never met Obama, yet blithely spin wild hypotheses without any real evidence. Even had it been a liberal film, this would still not have been shortlisted.

The hubris involved in attacking This is Not a Film is downright jaw-dropping. Jafar Panahi's film is a triumphant act of defiance, a film whose very existence could see its director jailed or worse. It is a testament to the power of cinema and human strength, a film that stands up to REAL tyranny, not some imagined socialist dictator with daddy issues. D'Souza's film isn't fit to drink Panahi's bath water, let alone be mentioned it the same breath.

D'Souza claims that the film's box office shows it should be nominated. By that logic, The Twilight Saga: Breaking Dawn - Part 2 should be nominated for Best Picture. Just because conservative groups paid hundreds of dollars to bus people to this hackjob he calls a documentary to try to sway the election (talk about preaching to the choir) doesn't necessarily mean it's popular, much less award worthy.

They snubbed Ken Burns too, D'Souza, get over yourself. And his film was actually good.
Email Post