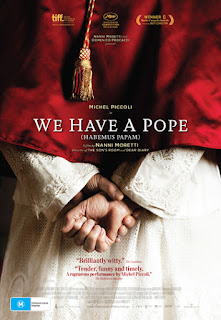 Conclave, the process by which the Cardinals of the Catholic Church select a new Pope, is a tradition that is as steeped in history as it is shrouded in secrecy. Outsiders know very little about the specifics of the process, and the Cardinals' notes are always burned once a Pope is selected. What actually goes on behind closed doors is left up to inference and conjecture. It is only when the smoke rising from the chimney above the Sistine Chapel changes from black to white that the outside world learns that a new Pope has indeed been chosen.

But what if the Cardinal chosen to be Pope doesn't want the job? It is that unthinkable situation that serves as the hook for Nanni Moretti's comedic drama, We Have a Pope.

As the film opens, the former Pope has just died, and the College of Cardinals has cloistered itself to elect the new Pontiff. Three names have come forward as possible frontrunners for the leader of the Catholic Church, and media speculation has reached a fever pitch (an all too familiar lunacy that Moretti mocks with special glee), and indeed those three Cardinals dominate the early rounds of voting.

However, as the voting progresses and no consensus is met, a new name emerges as the overwhelming favorite - Cardinal Melville (Michel Piccoli). Stunned, Melville accepts his new title. But just as he is to address the faithful from the balcony of the Sistine Chapel, he suffers a breakdown and retreats back into the conclave room. Thinking quickly, the Cardinals inform the world that the new Pope has secluded himself in prayer, but the truth is that he is simply overwhelmed by the magnitude of his newfound responsibilities. As his advisors seek psychological help for the increasingly withdrawn Pontiff, he escapes from the Vatican and sets out on his own.

While the faithful wait with bated breath, his psychoanalyst informs him that he has "parental deficit," and he becomes determined to get to the root of his fear and reluctance to fulfill the role he believes God has asked him to fill. In his absence, the Cardinals remain in conclave with an unwitting participant, a non-believing psychoanalyst (played by Moretti himself) who isn't allowed to leave the chapel until the new Pope is announced. While they are cut off from the outside world, they find new ways to amuse themselves, as the Pope continues his soul searching, trying to find the strength to bear the burden of being God's infallible representative on Earth.

There is an undeniable charm about the film that is hard to resist. Moretti directs with a kind of understated whimsy, both bemused and in awe of such an ancient and magisterial process. He pokes gentle fun at the process and its inherent absurdities, but it is neither pointed enough nor consistent enough to make much of an impact. Once the Pope is out on his own, Moretti completely misses an opportunity for greater thematic exploration. The people he meets during his time of introspection have seemingly little impact, although his rekindling of his old passion for acting and theatre offer a glimmer of what the film could have been.

The real highlight of the film, however, is Michel Piccoli's performance as the reluctant Pontiff. He embodies the inner conflict of being shouldered with expectations and responsibilities no mortal could ever hope to live up to in a way that the film itself never really does. It's never anything more than just a "nice little movie," which is a shame considering the abundant opportunities for thematic richness inherent to the story. We Have a Pope is a completely agreeable but exceedingly slight film that never seems to have progressed past the conceptual stage. Moretti states in the film's press notes that they started with the image of a new Pope being unable to address the faithful after his election and running away from the balcony. It's a powerful image that, sadly, never really blossoms into anything deeper. A film must be more than a concept alone, and even though it offers glimpses of something more, the final product seems only halfway there.